Arrests made as protests converge over toppled Confederate statue 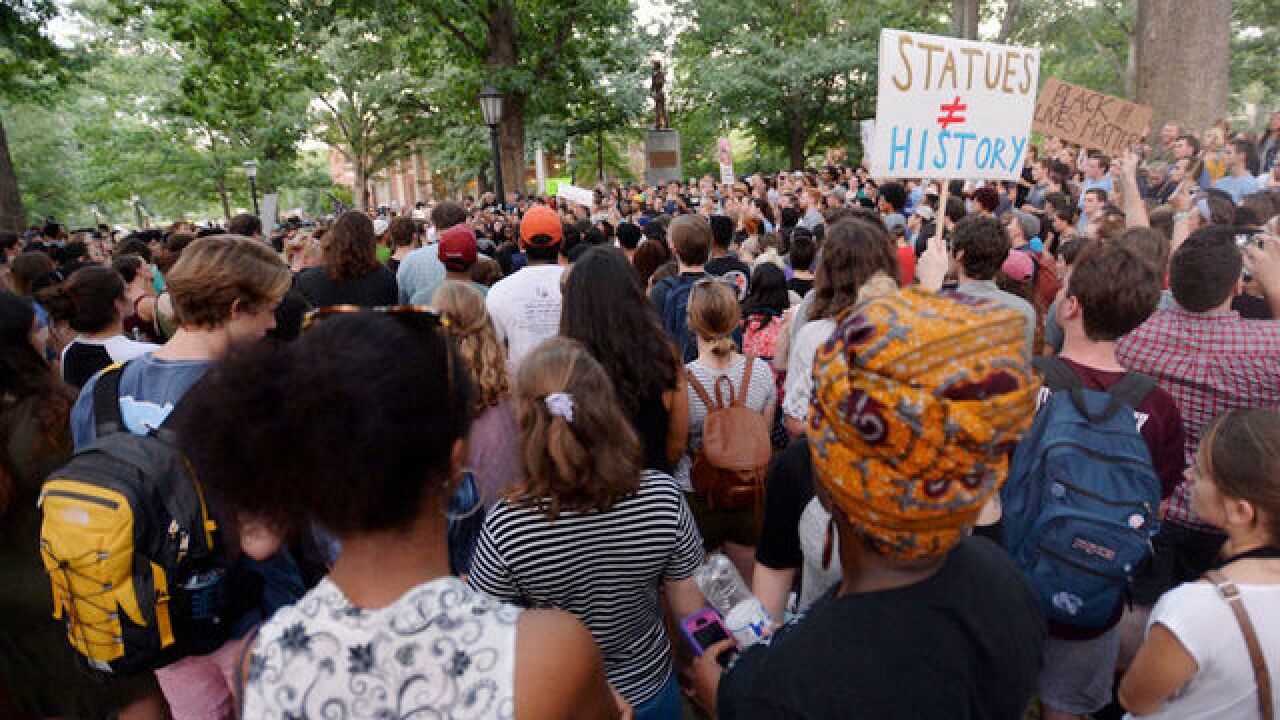 Image copyright 2018 Getty Images. All rights reserved. This material may not be published, broadcast, rewritten, or redistributed.
Sara D. Davis
<p>Demonstrators rally for the removal of a Confederate statue, coined Silent Sam, on the campus of the University of Chapel Hill on August 22, 2017 in Chapel Hill North Carolina. The city mayor had asked the university to take the channels to remove the statue. </p>

Supporters and opponents of the recent toppling of a Confederate monument in North Carolina turned out in Chapel Hill on Saturday to assert their stances.

Seven arrests were made in connection to a gathering on McCorkle Place, the University of North Carolina-Chapel Hill media relations office said.

The rival rallies came after 250 protesters knocked over the University of North Carolina's controversial "Silent Sam" Confederate statue at the school on Monday night.

On Saturday people congregated at and near the spot where the statue was torn down, news footage showed. Police were on the scene in numbers as people held banners, chanted and marched. Confederate flags could be seen.

CNN affiliate WTVD reported a barricade has been placed around the statue site. Protesters chanted "Hey hey ho ho, white supremacy has got to go."

Citing the volatile mood on the campus, the University of North Carolina on Friday urged people not to participate in the event.

"We do not know for sure what groups may attend, but we are mindful that the current atmosphere is highly charged, and protests that begin peacefully do not always remain that way," the university said in a statement Friday.

"For this reason, we urge you not to attend. For those who do attend, please know that we will do all we can to protect and keep everyone safe."

The school also said it learned that students and others have received threats in the wake of the toppling of the statue. It didn't elaborate on the nature of the threats.

The university said it was working with Chapel Hill officials and law enforcement. It said streets might be shut down and traffic rerouted.

Three people have been charged with misdemeanors in connection with the toppling of the statue.

The suspects, none of whom are affiliated with the school, face charges of misdemeanor riot and misdemeanor defacing a public monument, according to CNN local affiliates.

The people haven't been arrested and were not identified by the affiliates.

Thom Goolsby, a member of the UNC Board of Governors, said on Twitter that "Silent Sam" will be reinstalled in three months time "as required by state law."

The statue is the latest among several Confederate monuments to be removed, as communities continue to deal with the legacy of a contentious chapter in American history.

Silent Sam was not the first Confederate monument to come down in North Carolina. In August 2017, authorities said seven people were arrested in connection with the toppling of the Confederate Soldiers Monument during a protest in Durham.

The monument came down two days after the Unite the Right Rally in Charlottesville, Virginia, that left counterprotester Heather Heyer dead.