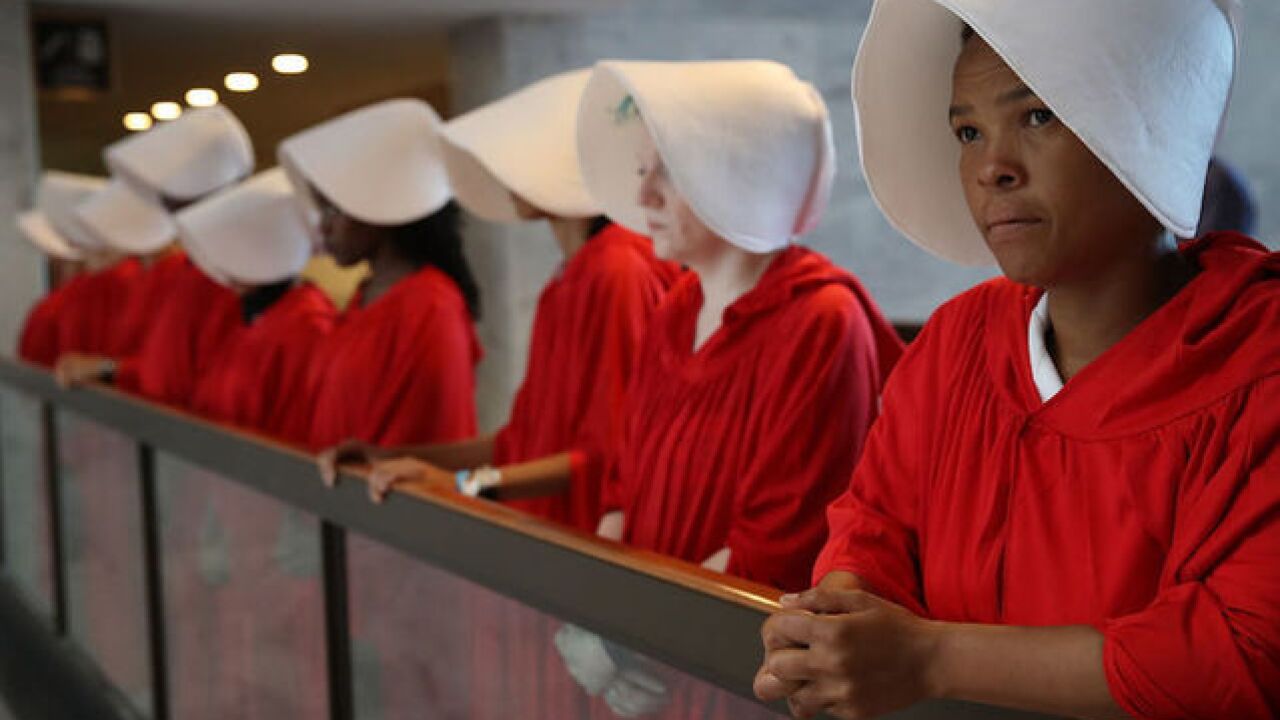 Image copyright 2018 Getty Images. All rights reserved. This material may not be published, broadcast, rewritten, or redistributed.
Win McNamee
<p>Protesters dressed in The Handmaid's Tale costume, protest outside the hearing room where Supreme Court nominee Judge Brett Kavanaugh will testify before the Senate Judiciary Committee during his Supreme Court confirmation hearing in the Hart Senate Office Building on Capitol Hill September 4, 2018 in Washington, DC. Kavanaugh was nominated by President Donald Trump to fill the vacancy on the court left by retiring Associate Justice Anthony Kennedy.</p>

A group of protesters bearing a message as stark as their red and white costumes are opposing Brett Kavanaugh's Supreme Court confirmation hearings.

They stood in silence Tuesday, the first day of the hearings, lining the walkways and atrium of the Hart Senate Office Building, their austere silhouettes evoking the dystopian persecution portrayed in the novel-turned-Emmy-award-winning Hulu drama "The Handmaid's Tale."

The group's restrained method was a sharp contrast to other scenes going on throughout the Senate side of Capitol Hill. Police arrested 70 people by the end of the day for "unlawful demonstration activities."

Inside the hearing, protesters shouted out, and Democrats immediately demanded the hearing be stalled until thousands of documents from Kavanaugh's time as a Bush-era White House lawyer are reviewed.

The silent protest was organized by the liberal advocacy group, Demand Justice, which has long opposed Donald Trump's pick to fill the vacancy left by retired Justice Anthony Kennedy.

The protestors' costumes resembled the dress of the "handmaids," who in the television show are forced into sexual servitude under the totalitarian government that has taken over part of the United States. Their reproductive rights are stripped completely away.

Although he has vowed to uphold the Constitution and be impartial, many fear Kavanaugh, in this lifelong position, could tilt the American legal system to the right for an entire generation.

If confirmed, Kavanaugh would replace Kennedy, who as a frequent swing vote on the bench often sided with liberal justices on issues like affirmative action, LGBT rights and abortion.

Senators are especially likely to grill Kavanaugh on his dissent from a ruling by the DC Circuit last October that an undocumented immigrant teen was entitled to seek an abortion.

He wrote that the high court has "held that the government may further those interests so long as it does not impose an undue burden on a woman seeking an abortion."

He said the majority opinion was "based on a constitutional principle as novel as it is wrong: a new right for unlawful immigrant minors in US government detention to obtain immediate abortion on demand."

Protesters dressed in long red capes and white "wings"-- headdresses that keep their eyes focused on the ground -- have become a more and more frequent appearance not only in the United States but across the globe as a symbol for women's rights.

Protesters dressed like handmaids during Vice President Mike Pence's visits to Philadelphia and Denver. In July, demonstrators in Poland wore the outfits during Donald Trump's visit. Women in both Ireland and Argentina have also donned the capes and hats to promote abortion rights.

The woman behind the costumes in the hit show is Ane Crabtree . She also designed costumes for the television shows "Westworld," Masters of Sex" and "Pan Am," and says the fact that women are using her creations in protest is a huge honor.

"To know that women are able to express themselves wholly and separately and be inspired is absolutely bigger than me, and bigger than any expectation I would have thought could come of this kind of career and work," she said.