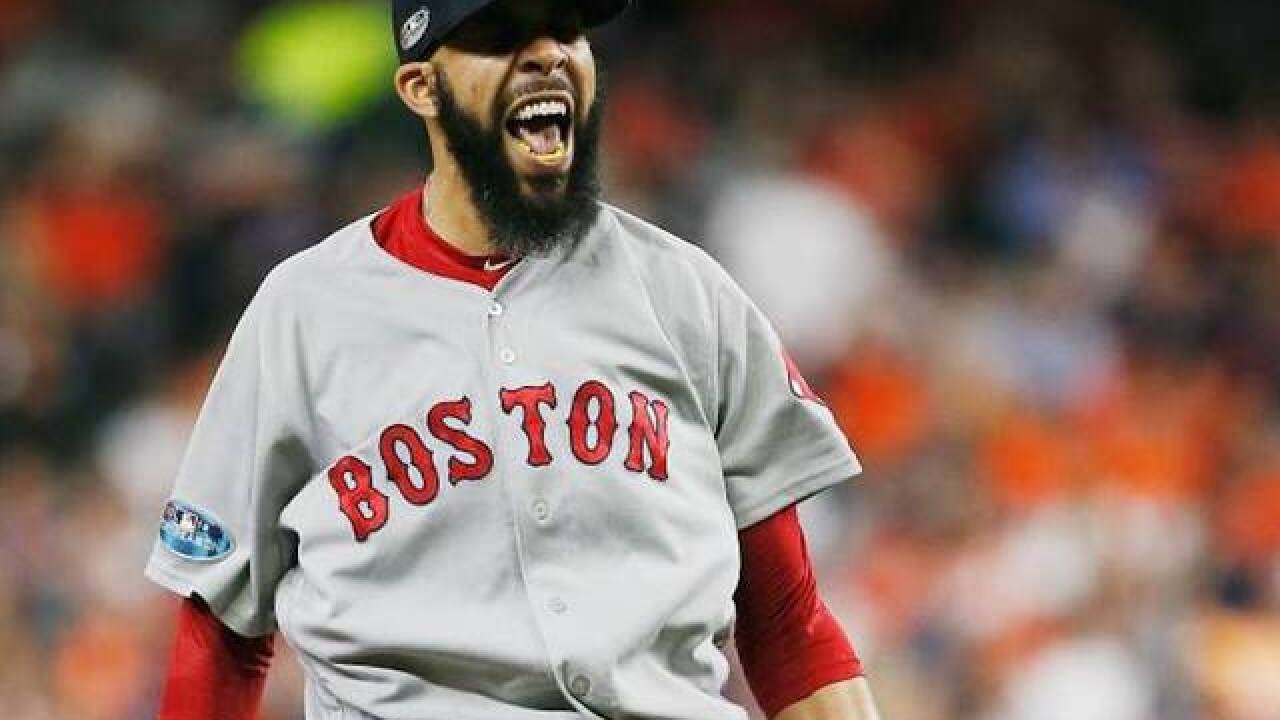 The Boston Red Sox advanced to the World Series, defeating the Houston Astros 4-1 Thursday in Game 5 of the American League Championship Series at Minute Maid Park in Houston.

David Price, whose postseason struggles have long been a talking point, delivered a solid performance for the Red Sox. The veteran left-hander went six shutout innings, striking out nine Astros.

J.D. Martinez finished 2-for-3, and his solo home run got Boston on the board in the third inning. Rafael Devers made it a 4-0 lead in the sixth with a three-run homer.

The Price playoff narrative has been beaten into the ground so much that even casual baseball fans are probably aware of his October history.

The five-time All-Star was a different pitcher Thursday night, and his changeup was a big reason.

It's one thing for Price to pitch spectacularly on a given night; it's another for that success to come in part because of a change in approach. That's something tangible he can carry into his first start in the 2018 World Series.

Expecting the veteran left-hander to be this effective in the Fall Classic might be unrealistic, but a better version of Price than his typical postseason self would make a big difference for the Red Sox in the next round.

Nathan Eovaldi has never pitched in a World Series, and Rick Porcello's playoff starts with Boston have been a mixed bag. Most importantly, Chris Sale has a  stomach illness  that kept him out of starting Game 5.

If the Red Sox can count on Price, they'll have one fewer question mark surrounding their starting rotation.

Astros Primed to Contend Again in 2019

As great as the Astros played this year, history wasn't on their side.  MLB  will now go 18 years without a repeat World Series champion.

The good news for Houston is that it has a good chance to return to the playoffs and make another title challenge in 2019.

The Astros could see some experienced veterans depart in free agency. Marwin Gonzalez, Charlie Morton, Evan Gattis, Tony Sipp and Dallas Keuchel are all hitting the open market in the offseason.

The Justin Verlander trade—the Astros  absorbed  $40 million from his contract—showed ownership is willing to make the financial commitment necessary to put together a championship-caliber roster. Houston may wind up losing one or more of its free agents, but it shouldn't be a mass exodus.

The Astros' returning stars aren't due to decline in 2019, either. Jose Altuve and George Springer are the elder statesmen yet are only 28 and 29, respectively. Alex Bregman, who enjoyed a breakout in 2018, will turn 25 in March. Carlos Correa turned 24 last month.

Regarding the rotation, Gerrit Cole averaged a career-high 12.4 strikeouts per nine innings and saw his FIP fall from 4.08 in 2017 to 2.70, per  Baseball Reference . A free agent in 2020, Cole could well repeat that success next season.

And the 35-year-old Verlander continues to defy the aging curve. Maybe he'll fall off in 2019, but it feels like that has been a possibility for the last three or four years.

Luck is a factor in determining a team's fate. But strictly from a roster point of view, the pieces are there for the Astros to play in October next season.

The Astros surrendered eight combined runs in their first four playoff wins. The Red Sox scored 27 total runs as they reeled off four straight victories to clinch the AL pennant.

When Mookie Betts and Andrew Benintendi combine to go 0-for-10, Ian Kinsler and Mitch Moreland and deliver two hits apiece. Both Kinsler and Moreland scored on Devers' homer.

Likewise, one mistake thrown to Martinez is all it takes to see the ball sail over the fence. Verlander should've had a strikeout with a slider down and away. Instead, he had to throw another pitch and left a hanging curveball up in the zone.

The Red Sox will get either the Los Angeles Dodgers or Milwaukee Brewers in the postseason. The two teams have held hitters to a .193 average, according to  ESPN.com . The Astros were third on that list (.199) entering Thursday night, though, and are packing their bags.

Regardless of the opponent, Boston's deep lineup is enough to power the team to a ninth World Series title.

The Red Sox await the winner of the National League Championship Series between the Los Angeles Dodgers and Milwaukee Brewers. The Dodgers lead the series 3-2, with Game 6 set for Friday night at Miller Park in Milwaukee.