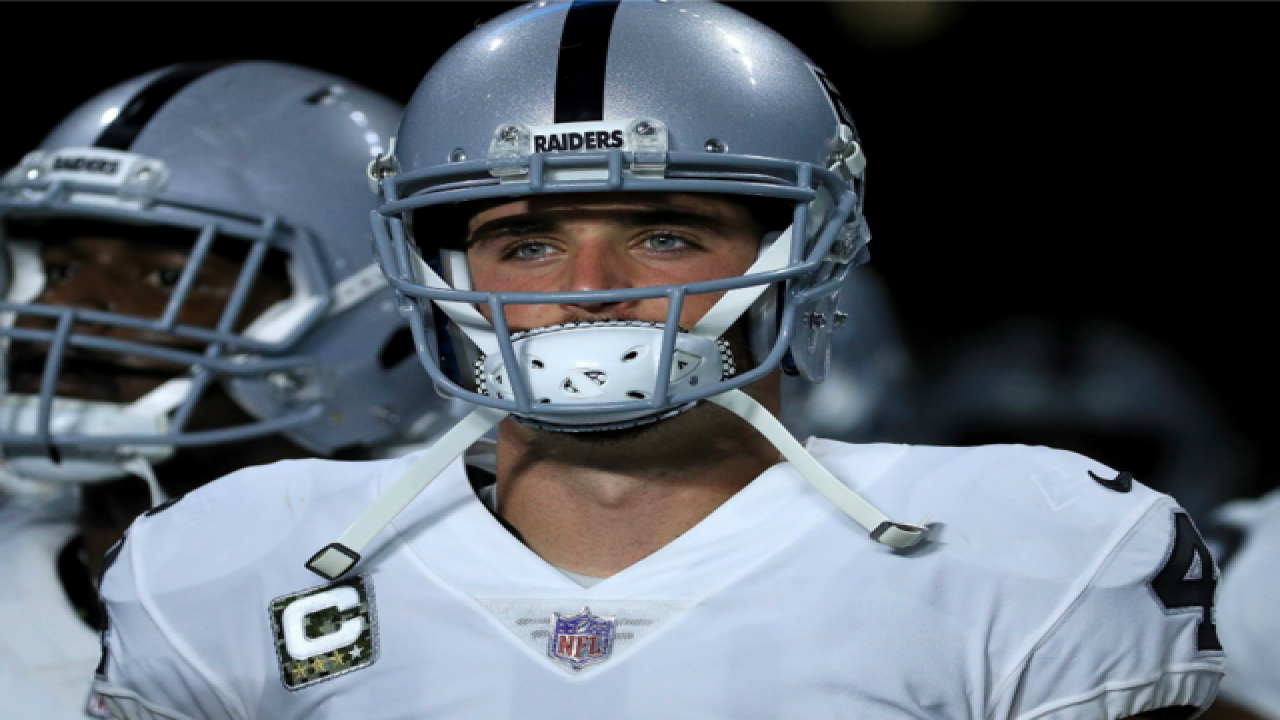 Copyright 2017 Scripps Media, Inc. All rights reserved. This material may not be published, broadcast, rewritten, or redistributed.
<p>Derek Carr #4 of the Oakland Raiders of the Oakland Raiders looks on during a game against the Miami Dolphins at Hard Rock Stadium on November 5, 2017 in Miami Gardens, Florida. (Getty Images)</p>

Members of the Oakland Raiders have denied a claim from the wife of an NFL player that members of the Raiders offensive line allowed quarterback Derek Carr to get hurt due to a dispute over national anthem protests.

Miko Grimes, wife of Tampa Bay Buccaneers cornerback Brent Grimes and co-star of the reality show "Baller Wives" on VH1, claimed Carr's injury during a game earlier this season was directly related to an anthem dispute with his teammates.

"The reason Derek Carr got injured is because the Raiders' offensive line allowed him to get injured because he was against them protesting," Grimes said on Revolt TV, a digital network created by Sean "Diddy" Combs.

Grimes said Carr was opposed to players sitting or kneeling during the national anthem, which led to a pregame dispute with members of the Raiders' offensive line, the only all-minority offensive line in the NFL.

"Derek Carr is a Bible thumper to the fullest, and so he was basically trying to force the players to read the Bible before the game and do all this stuff, and they were like, 'No, no, no, no, that's you.' And so he was so upset about when the whole offensive line was saying they were gonna kneel, he was like, 'No, no, no, no. You're not kneeling. No, this is America. You're gonna stand for the flag,'" Grimes said.

The game Grimes seems to refer to was the Raiders' Sept. 24 matchup at the Washington Redskins. That game took place two days after President Trump called for those who sit or kneel during the anthem to be "fired."

Before that game, a majority of Raiders players, including the entire offensive line, declined to stand during the anthem. ESPN noted Carr "appeared to pray while looking skyward and standing."

According to Grimes, the alleged disagreement over the national anthem protests prompted the Raiders' offensive linemen to do an intentionally poor job of blocking for Carr, who was sacked a season-high four times in the Raiders' 27-10 loss to the Redskins.

Told by several Raiders sources this claim is entirely false. "This couldn't be further from the truth" Here's how it was explained...

Raiders didn't know what to do. I'm told "Derek Carr never told his team to stand, sit, or kneel. He told them I respect your choice"

I also got a text from a Raiders offensive player "please don't ask me for a response to dumb stories. Derek is our guy" #Raiders

Also on Tuesday, Raiders offensive lineman Donald Penn took to Twitter to denounce Grimes' claim. "It's crazy how people will make up lies and tell a story so false and untrue 2 get attention," Penn wrote.

On Tuesday afternoon, Carr tweeted Proverbs 13:5: "Those who control their tongue will have a long life; opening your mouth can ruin everything." It's unclear whether his tweet was related to Grimes' comments.