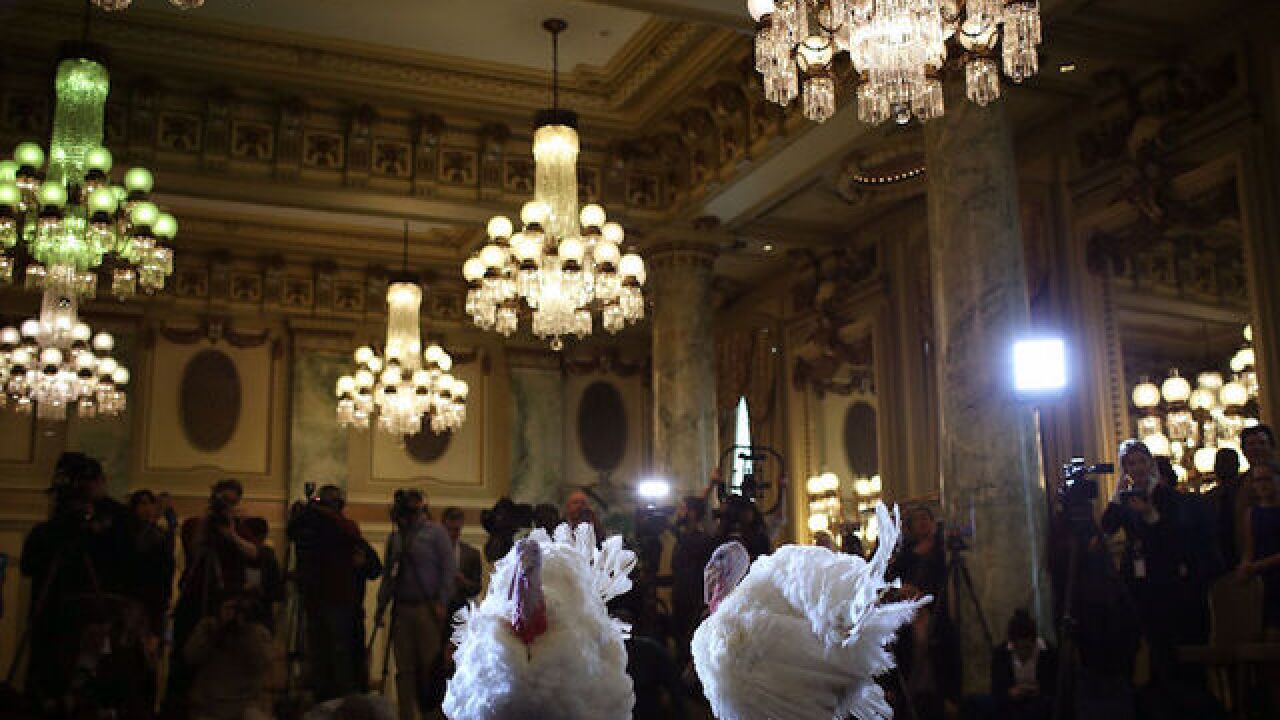 Image copyright 2018 Getty Images. All rights reserved. This material may not be published, broadcast, rewritten, or redistributed.
Win McNamee
<p>Peas and Carrots, the National Thanksgiving Turkey and its alternate, are shown to members of the media during a press conference held by the National Turkey Federation November 19, 2018 at the Willard Hotel in Washington, DC. </p>

President Trump just announced that Peas the turkey will get this year's presidential pardon — but added that carrots "refused to concede and demanded a recount."

"The winner of this vote was decided by a fair and open election conducted on the White House website. This was a fair election. Unfortunately Carrots refused to concede and demanded a recount and we are fighting with Carrots."

Trump's joke appears to be a reference to the hotly contested Senate and gubernatorial elections in Florida. Democrats Bill Nelson and Andrew Gillum eventually conceded to their Republican opponents after a recount process.

Watch the full pardoning below:

Approximately 44 million turkeys were Thanksgiving dinner in the United States last year, but on Tuesday at the White House, one lucky bird is going to be spared a similar fate.

President Donald Trump will participate in the time-honored tradition of the turkey pardon, granting clemency to a bird in the White House Rose Garden before jetting off to Mar-a-Lago for a long holiday weekend.

Hailing from South Dakota, this year's pardon contestants are Peas and Carrots. The poultry pair's journey to Washington was a veritable gravy train.

Presidential turkeys are raised separately from their soon-to-be-stuffed counterparts, according to the South Dakota Soybean Research and Promotion Council .

Per the council, Peas and Carrots lived in their own house away from the other turkeys and were handled regularly to "get used to people and activity," as it is important that they wouldn't be in a fowl mood for their big day.

Weighing in at 39 and 41 pounds, respectively, Peas and Carrots hatched in late June of this year. Since then, the fluffy duo has developed a social media presence, knowing the importance of appealing to the baste.

Picking who to pardon

The National Turkey Federation documented their trip from the Dakotas all the way to Washington via the warm backseat of a wood shaving-filled Suburban.

Upon their arrival, the duo rested up for their big day blocks away from the White House at the luxe Willard Hotel.

Peas and Carrots took the stage at a formal news conference Monday morning at the Willard and fun facts about each turkey were posted on the Turkey Federation's account . Peas, for instance, enjoys popcorn and the musical stylings of Brad Paisley. Carrots is more of an Elvis fan, preferring to snack on M&Ms.

As of Tuesday morning, the poll for a favorite turkey on the official White House account was tied 50-50 with just under 50,000 votes -- certainly within the margin of error for a recount.

Although a president traditionally pardons one turkey, both Peas and Carrots will live out the rest of their turkey lives -- an expectancy of 10 years -- at Virginia Tech's "Gobblers Rest" exhibit, where they will be cared for by students and veterinarians in the university's Animal and Poultry Sciences Department.

Rumors of turkey pardons go back in presidential history as far as the Lincoln administration. Folklore has it that Lincoln's young son asked his father to spare a pet turkey that was supposed to be part of their Thanksgiving dinner.

The National Turkey Federation became the official turkey supplier to the first family in 1947 and the formal turkey presentation ceremony has been around since President Harry Truman. Truman was the first to accept a turkey from them -- however, he did not spare the bird.

The first documented turkey pardon was given by President John F. Kennedy in 1963.

Pardoning the turkeys didn't catch on right away. Even though President Gerald Ford pardoned President Richard Nixon, neither one of them decided to officially pardon any turkeys.