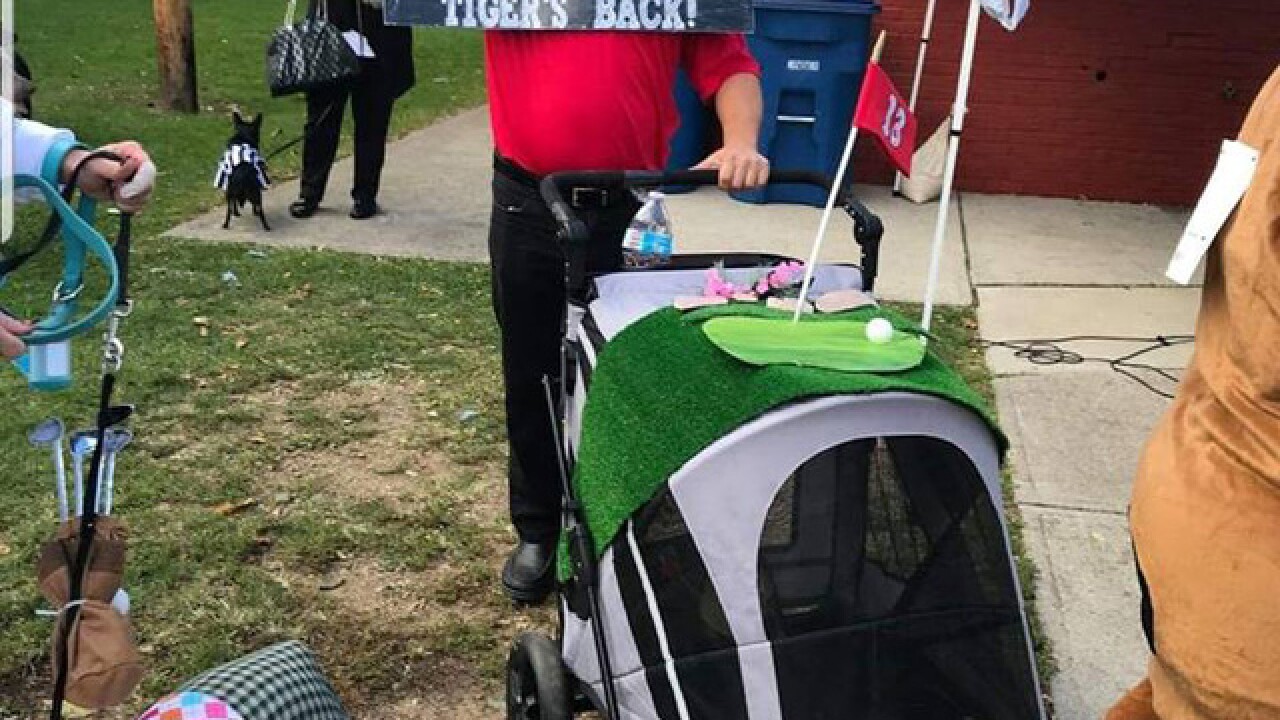 Copyright 2018 Scripps Media, Inc. All rights reserved. This material may not be published, broadcast, rewritten, or redistributed.
<p>This Tiger Woods costume at the Lakewood Spooky Pooch Parade caused a stir on social media. News 5 has opted not to show the costume in its entirety due to its offensive nature. (Source: Facebook user)</p>

LAKEWOOD, Ohio — Ohio nonprofit LakewoodAlive has apologized after a man dressed in a blackface Tiger Woods costume marched in the organization’s Spooky Pooch Parade. People on social media have called the costume racist, disgusting and offensive.

In a video posted to Facebook by LakewoodAlive that has since been removed, the unidentified man was seen wearing blackface makeup while dressed in Woods’ trademark red polo shirt and Nike hat. He was seen holding a frame with the words “Breaking News – Tiger’s Back,” and pushing a pet stroller outfitted with a mock putting green.

By Monday morning, several users responded on the nonprofit's Facebook page condemning the man’s costume as well as the organization for allowing him to march in the parade.

“You need to respond to the fact that a man in blackface marched in your parade,” Clara Masters said in a Facebook comment. “This is not okay and incredibly offensive.”

“This racist costume should never have been allowed in the event,” wrote Alison Meredith. “The participant should have been stopped at registration, and when that failed should have been pulled from the parade at whatever point an organizer saw it, even at the risk of 'causing a scene'. The tepid response and shrugging off of responsibility are making a terrible situation much worse. You allowed a blatant and disgusting display of racism in your event that was advertised as being for the community. At the absolute least the community is owed an apology and a clear plan for future events that includes advertised guidelines and a firm zero tolerance of racist costumes, speech, actions, etc, and accountability from the organizers and event team that they will not allow something like this to happen to again.”

On Monday morning, LakewoodAlive posted a statement regarding the parade:

"LakewoodAlive is a non-profit community development organization whose mission is to foster and sustain vibrant neighborhoods. At the heart of Lakewood’s vibrancy is inclusiveness and diversity.

"An individual marched in Saturday’s Spooky Pooch Parade with his family in a costume that is not consistent with our values as an inclusive organization and community. We apologize for not addressing the issue on the spot.

"Effective immediately, at all LakewoodAlive events, LakewoodAlive shall reserve the right to refuse individuals the ability to participate in events – either as participants or vendors – as LakewoodAlive board and staff may deem. We will attempt to exercise good judgment moving forward ensuring that we celebrate our inclusive community.”