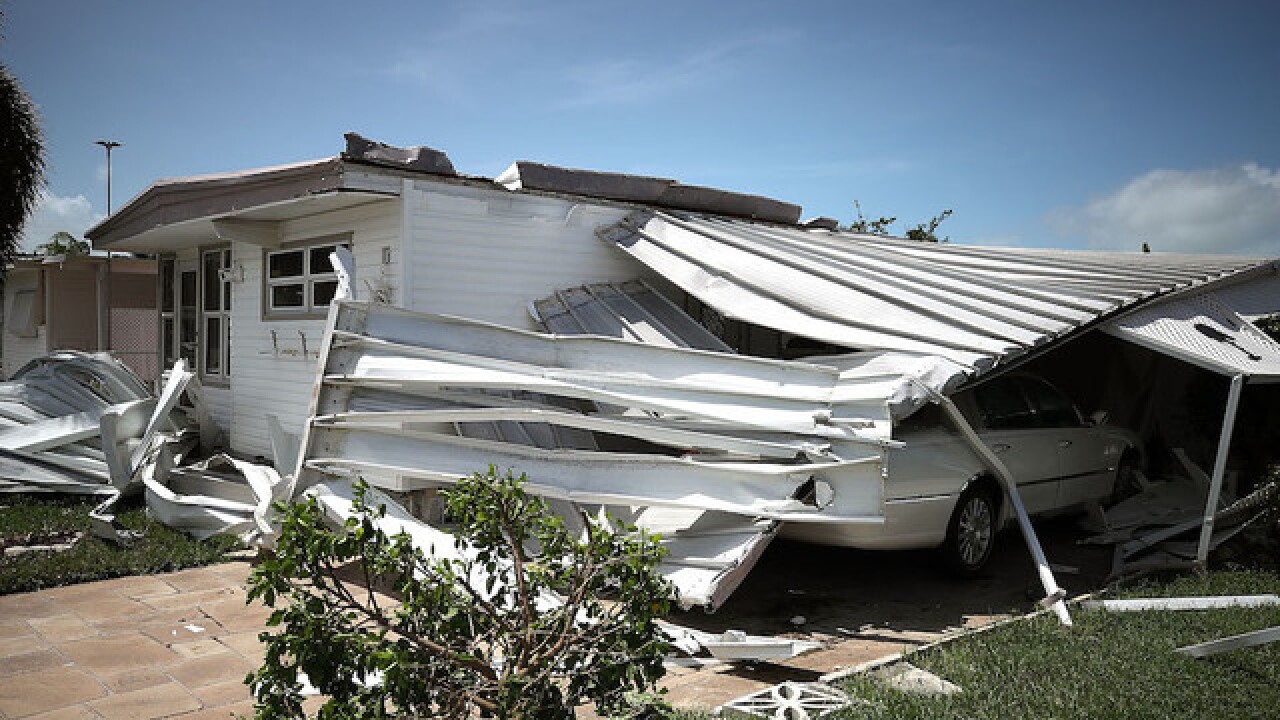 Image copyright 2017 Getty Images. All rights reserved. This material may not be published, broadcast, rewritten, or redistributed.
Mark Wilson
<p>A home is shown damaged after Hurricane Irma hit the area on September 11, 2017 in East Naples, Florida.</p>

Only now are we seeing how badly Hurricane Irma decimated the Florida Keys.

Two days after Irma made landfall there, authorities and residents were finally able to reach some of the islands Tuesday.

What they found was devastating: An estimated 25 percent of the houses on the chain of islands have been destroyed, the Federal Emergency Management Agency said Tuesday. Another 65 percent suffered major damage.

"Basically, every house in the Keys was impacted some way," FEMA Administrator Brock Long said.

It's still not clear how many casualties Irma caused on the Keys.

Darwin Tabacco, who stayed on Big Pine Key during Irma, is one of the luckiest residents. Both he and his house survived.

"A lot of people lost everything," he said Tuesday morning. "There's homes blown off the stilts. There's power lines down all over the place. Trees completely uprooted. People's businesses flooded. Septic fields flooding. It's just terrible."

William Rose told CNN his family in the Keys is unreachable. He's not sure whether his mother, stepdad, grandmother and aunt survived.

"I have no idea, but I'm trying to stay positive," Rose said.

Before the Keys lost cell phone service, he received a text from his mother, who chose not to evacuate.

"This is terrible. I will never do this again," the text read. "I'm so glad you got out."

Irma, a mammoth that stretched 650 miles from east to west, has pummeled at least nine states -- turning streets into rivers, ripping down power lines, uprooting trees and cutting off coastal communities.

Irma was downgraded from a tropical storm to a tropical depression Monday night, but is still expected to bring torrential rainfall as far north as North Carolina on Tuesday.

-- Six storm-related deaths have been reported:

Georgia: Three deaths reported. A 62-year-old man who was on his roof was killed in Worth County, which experienced wind gusts of 69 mph, according to Kannetha Clem, a spokeswoman for the Worth County Sheriff's Office. Another man was killed in Sandy Springs, an Atlanta suburb, when a tree fell and "literally cut the home in half," said Sharon Kraun, the city's communications director. A woman was killed when a downed tree struck her vehicle in Cumming, north of Atlanta, as the car sat in a private driveway, the Forsyth County Sheriff's Office. Florida: Two deaths: A driver died in a car accident on State Road 417, said Orange County Fire Rescue Chief Otto Drozd. Another person died in Miami-Dade County from carbon monoxide poisoning after using a generator indoors, according to the Miami-Dade mayor's office. South Carolina: A 57-year-old South Carolina man was fatally hit by a falling tree limb during the storm, Abbeville County Coroner Ronnie Ashley told CNN.

-- Massive power outages remain throughout the Southeast. These figures are as of Tuesday 5 a.m.:

-- All storm surge warnings and tropical storm warnings have been discontinued.

Beyond the Keys, Floridians were anxious to return and see how their homes weathered the storm. But officials urged patience.

"Check with local officials before returning home to make sure you can safely do so," said Gov. Rick Scott on Monday.

Flights, hospitals will be back online

While the Keys have an exhaustive recovery ahead, signs of normalcy will pop up Tuesday elsewhere in Florida.

Many of Florida's airports are scheduled to re-open with limited operations Tuesday.

And Florida Hospital, a health provider in the state, said it plans to reopen many of its impacted facilities on Tuesday or Wednesday.

Even a weakened Irma engulfed cities as far north as Charleston, South Carolina, on Tuesday.

"I really didn't expect it to become this bad here," Charleston resident Mike Stusnick said Tuesday. "It came in really fast last night. ... We were just praying that it didn't come all the way into the house, and it didn't."

Jacksonville, Florida -- the largest city by area in the contiguous US -- is still trying to recover from record-breaking storm surge and flooding on Monday.

Before slamming into the United States, Irma hit Cuba late Friday as a Category 5 hurricane. On Monday, Cuban state TV announced 10 hurricane related deaths -- meaning Irma killed a total of 36 people in the Caribbean before heading to the US.

This is the first year on record that the continental United States has had two Category 4 hurricane landfalls in the same year.