'Into the Wild' bus likely lands a home at Fairbanks museum 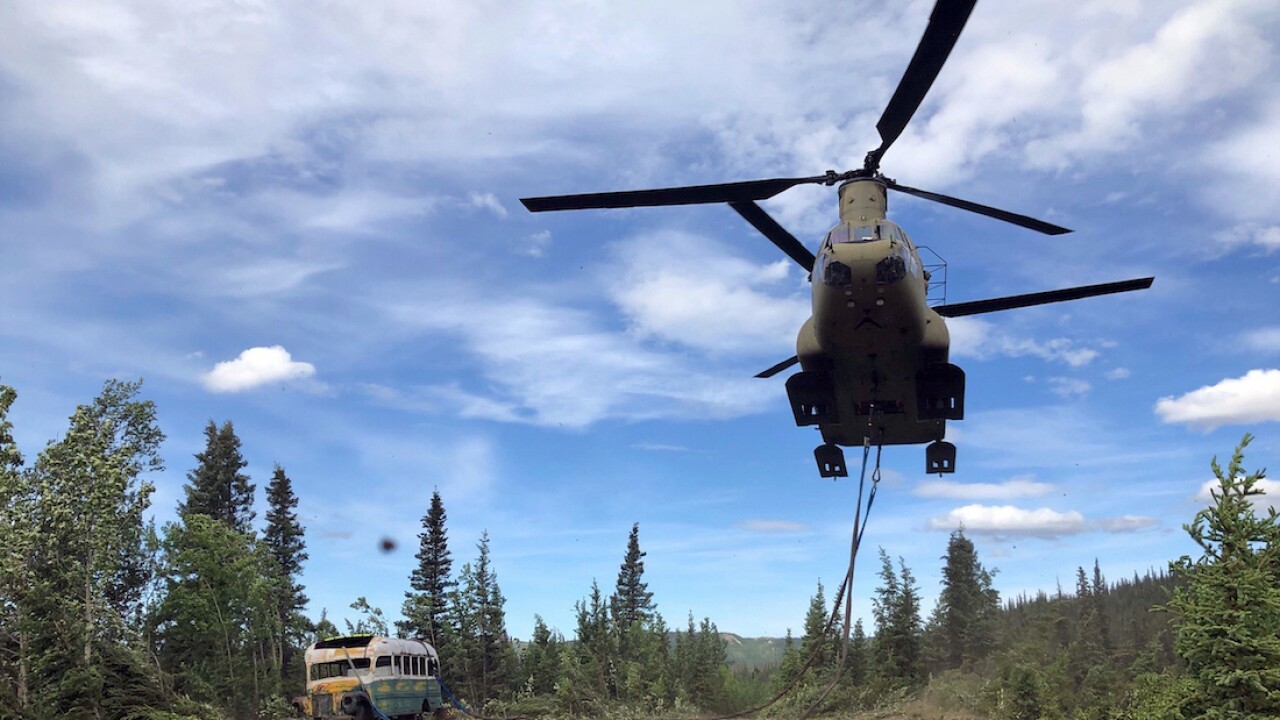 Sgt. Seth LaCount/AP
FILE - In this June 18, 2020, file photo released by the Alaska National Guard, Alaska Army National Guard soldiers use a CH-47 Chinook helicopter to remove an abandoned bus, popularized by the book and movie "Into the Wild," out of its location in the Alaska backcountry. The state Department of Natural Resources said Thursday, July 30, that it intends to negotiate with the University of Alaska's Museum of the North in Fairbanks to display the bus. (Sgt. Seth LaCount/Alaska National Guard via AP, File)

ANCHORAGE, Alaska (AP) — The abandoned city bus in the Alaska backcountry that was made famous by the "Into the Wild" book in 1996 and a 2007 movie looks like it will have a new home in Fairbanks.

The Alaska Department of Natural Resources says it intends to negotiate with the University of Alaska's Museum of the North to restore and display the bus.

“Of the many expressions of interest in the bus, the proposal from the UA Museum of the North best met the conditions we at DNR had established to ensure this historical and cultural object will be preserved in a safe location where the public could experience it fully, yet safely and respectfully, and without the specter of profiteering,” DNR Commissioner Corri Feige said in a statement.

A final agreement is expected within a few months.

“I believe that giving Bus 142 a long-term home in Fairbanks at the UA Museum of the North can help preserve and tell the stories of all these people,” Feige said. “It can honor all of the lives and dreams, as well as the deaths and sorrows associated with the bus, and do so with respect and dignity. I appreciate the Museum coming forward with its proposal, and look forward to working with them on a final agreement.”

Christopher McCandless hiked to the bus in 1992, and couldn't hike back out because of a swollen river.

He died of starvation in the bus, which has become a dangerous destination for those wanting to pay homage to McCandless.

In June, the bus was removed from the wilderness because it became a "sometimes deadly attraction to outdoor adventurers," the The Alaska Department of Natural Resources said in a press release.