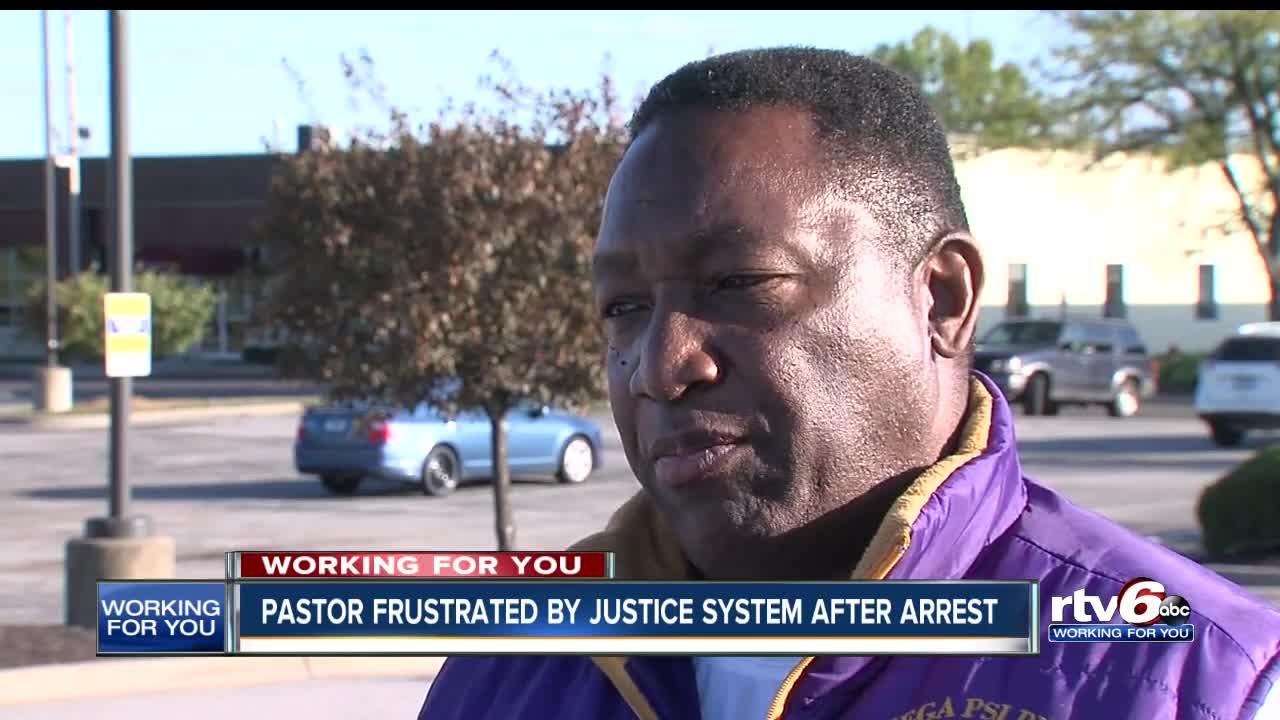 Pastor Joy Thornton said an incident at a flea market where he dialed 911 for help led to his wrongful arrest and cost him his job.

INDIANAPOLIS, Ind. — For years, Joy Thornton has been a pastor in one of Indianapolis' toughest neighborhoods. He has regularly told young black men to stay out of trouble. That's a task he thought was possible until trouble caught up to him .

"I don't think I have that leverage anymore of credibility to be able to say to African-American young people or any young people about staying out of trouble when trouble knocked at my door," Thornton said.

It's a game of he said/she said, which Thornton said he lost after being confronted by a manager at the Peddler's Mall flea market in September 2018.

"I was leaving the mall and on leaving a woman came up to me and confronted me about she didn't appreciate me talking to her employee like that and I was trying to ask her what was she talking about," Thornton said. "I said, 'Ma'am, I don't know who you are and I don't appreciate you talking to me as disrespectfully as you are.'"

Thornton said all he was doing was playing a game of checkers in the store, and he eventually dialed 911 as the woman yelled at him. He said he left the store until police arrived, but things didn't get better.

"When I went in with those officers, she had hijacked the situation as if I was the predator and he believed her," Thornton said. "With all the scenes I've seen on television what happens to folk, I was not going to escalate that situation and so I left that mall and that was it until I went back in January to get my phone fixed."

When Thornton returned to the store in January, the woman who Thornton had an issue with last time spotted him from across the building. Minutes later, he was approached by two officers.

"They come over to me and say 'why are you in here?'" Thornton said. "I said, 'I'm getting my phone fixed.' He said, 'Well, you're not supposed to be in here.' I said, 'Sir, I'm just getting my phone fixed,' and then he said, 'Put your hands behind your back. You're under arrest.' Just like that."

Thornton, an Indianapolis Fire Department chaplain, was in full uniform and was originally planning to head downtown to a fire department event. But, instead, the pastor and chaplain was handcuffed and taken to jail for trespassing.

According to documents obtained by WRTV from the Marion County Prosecutor's Office, the store manager told police she had banned Thornton from the store following the confrontation more than four months prior. Thornton said that was information he was never told.

"They took my badge off, took my chain off, took my wallet, then marched me out to the paddywagon, everybody looking and staring, I'm in uniform," Thornton said.

Court documents show Thornton spent two nights in the Marion County Jail and was eventually charged and convicted of trespassing, a Class A misdemeanor. Thornton lost his job as an IFD chaplain and likely some faith from his congregation.

Now the pastor is appealing his conviction because he said he never knew he was banned from the Peddler's Mall in the first place. As he waits for his appeal, Thornton wants to shed light on how some people looking for help can quickly become a suspect, an issue he says is one of many in Marion County's justice system.

"I shouldn't have ever called 911 to go back over there to that mall," he said. "As a result of that, here's where I am today."

This story was originally published by Cameron Ridle at WRTV.