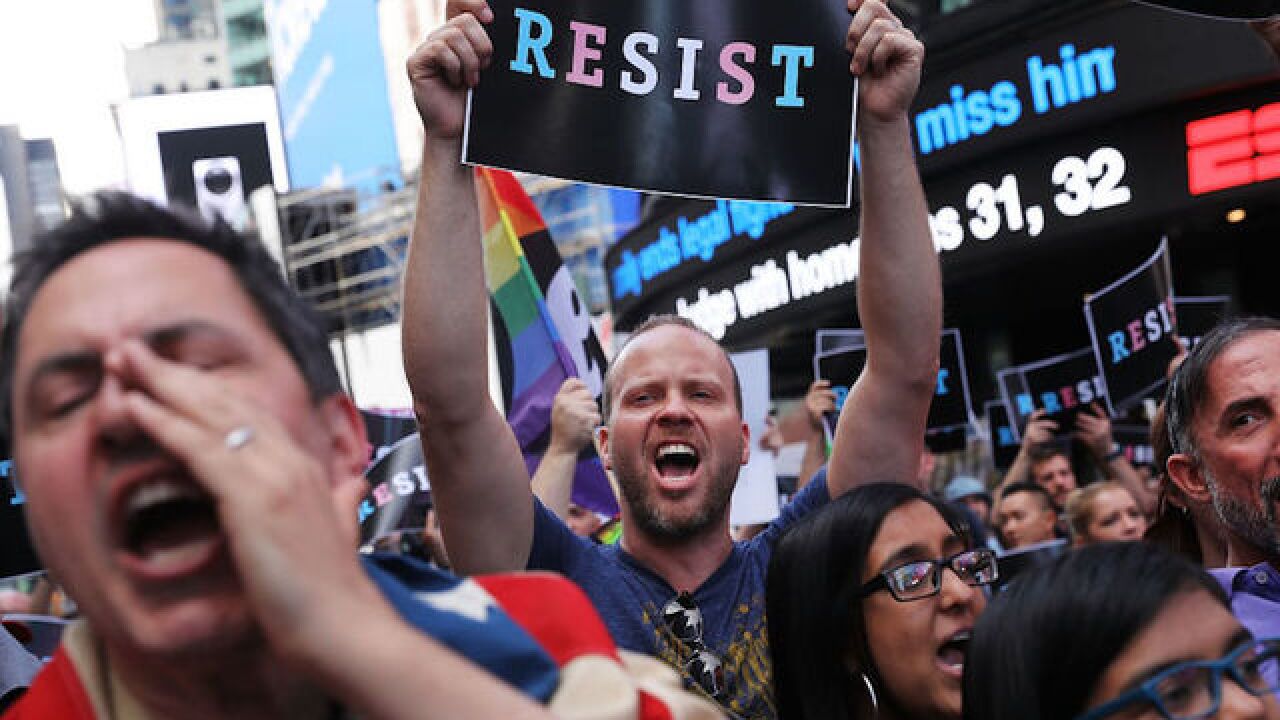 Image copyright 2017 Getty Images. All rights reserved. This material may not be published, broadcast, rewritten, or redistributed.
Spencer Platt
<p>Dozens of protesters gather in Times Square near a military recruitment center to show their anger at President Donald Trump's decision to reinstate a ban on transgender individuals from serving in the military on July 26, 2017 in New York City. </p>

The Human Rights Campaign on Sunday called for the Trump administration not to go forward with a rollback of protections for transgender people, following a report in The New York Times on a draft proposal.

HRC is among the nation's most prominent LGBTQ rights groups, and its statement Sunday called on Congress to pass legislation enshrining protections it says are at threat should the Trump administration go forward with the reported plan.

The Times report said the Department of Health and Human Services is working to define sex under Title IX as solely male or female at birth, with no room for change. The proposal could formally be presented to the Justice Department by the end of the year, sources told the Times.

"Sex means a person's status as male or female based on immutable biological traits identifiable by or before birth," the proposal says, according to The Times.

The move, if made and followed through in coordination with other key federal departments, would mark a major shift for transgender rights under the law and reverse course from the Obama administration, which expanded the legal concept of gender in several instances to recognize gender identity did not always match one's sex as determined at birth.

Vanita Gupta, head of The Leadership Conference on Civil and Human Rights, said in a statement on Sunday that the proposal "defies the medical community, science, civil rights laws, the courts and the dictates of human decency."

The report published Sunday said the new definition, if adopted, would erase federal recognition for the many Americans who identify as a gender different than the one they were identified with at birth. It also said the move would be relevant in particular to a pair of proposed rules, one from the Education Department on sex discrimination at schools and colleges and another at HHS on health programs that receive federal funding.

HHS spokesperson Caitlin Oakley declined to comment to CNN "on alleged leaked documents," and a statement from Roger Severino, the head of HHS' office of civil rights, said HHS was following a court order blocking a rule on gender identity.

"A federal court has blocked HHS's rule on gender identity and termination of pregnancy as contrary to law and infringing the rights of healthcare providers across the country," Severino's statement said. "The court order remains in full force and effect today and HHS is abiding by it as we continue to review the issue."

The Times report said HHS has argued privately that sex should not include gender identity "or even homosexuality," and that the Obama administration was wrong to extend civil rights protections. It said additionally that HHS officials were looking to a 2016 federal court ruling on a provision of Obamacare, where Judge Reed O'Connor said, "Congress did not understand 'sex' to include 'gender identity.'"

The draft proposal would be one of the latest attempts to push back against Obama administration policies on gender identity and LGBT rights, much of which has come in contrast to President Donald Trump's pledge during his 2016 presidential campaign to be an ally to the LGBT community.

HRC described the news Sunday as "the latest effort in a consistent, multi-pronged campaign by the Trump-Pence White House over the past two years to undermine the rights and welfare of LGBTQ people."

"Defining 'sex' in this narrow language tailored to the talking points of anti-equality extremists is part of a deliberate strategy to eliminate federal protections for LGBTQ people," Griffin said.