How CNN continued broadcasting through evacuation 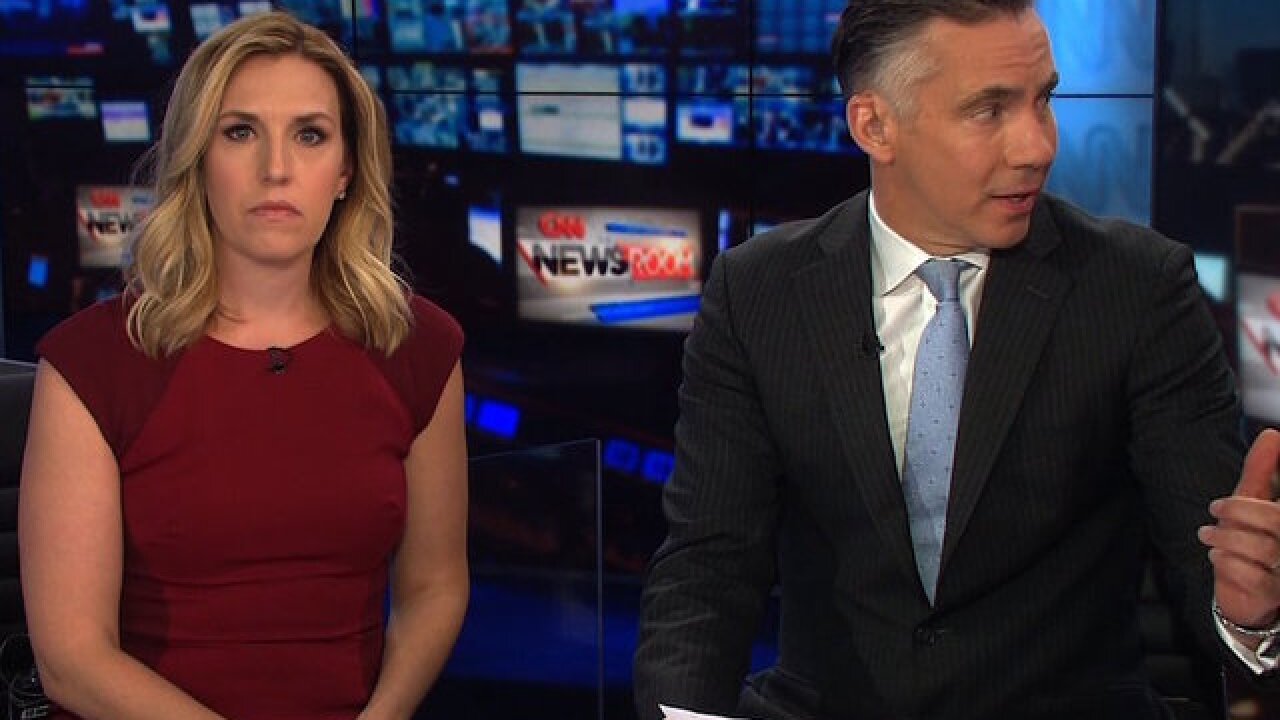 © 2018 Cable News Network, Inc.
CNN
<p>CNN anchors Poppy Harlow and Jim Sciutto were covering the suspicious packages sent to the Clintons and the Obamas when the fire alarm sounded inside their New York City studio.</p>

CNN anchors Poppy Harlow and Jim Sciutto were covering the suspicious packages sent to the Clintons and the Obamas when the fire alarm sounded inside their New York City studio.

There was another package -- and it was inside the building where they were broadcasting.

Over the loudspeaker, CNN staffers were told to evacuate the building. Right over Harlow's shoulder, viewers could see staffers grabbing their coats and walking out to the lobby.

Police officers were already arriving outside.

The suspicious device was delivered to the mailroom of CNN's parent company, WarnerMedia, around 9:30 a.m. ET on Wednesday, according to a WarnerMedia executive.

It "appeared to be a pipe bomb," the executive said. It was addressed to John Brennan, the former CIA director, who is a commentator on NBC and MSNBC.

The fire alarm was audible on TV at 10:09 a.m. The entire WarnerMedia operation in New York was evacuated, from CNN's offices and studios on the lower floors to the corporate suites upstairs.

CNN had to scramble to keep the 10 a.m. newscast on the air. When the anchors heard the fire alarm, they asked a question to a remote guest, Tom Fuentes, which gave them a moment to size up the situation. Then they tossed to commercial and evacuated.

The newscast is usually produced out of a control room in Atlanta, which is why there was no interruption in programming. In the control room, executive producer Michelle Moryc lined up correspondent Rene Marsh, who was standing by for a live shot in the DC bureau, to substitute anchor.

In her wall of monitors, Moryc also saw reporter Shimon Prokupecz in front of another camera in the Washington bureau. He had just been on the air covering the other suspicious packages. He was now gathering information about the situation at Time Warner Center.

So when the newscast came back from commercial, Marsh explained the evacuation in New York and tossed to Prokupecz for more information.

Within a few minutes, Harlow and Sciutto were back on live TV, thanks to a staffer's cell phone and the Skype app. Viewers were able to see the two anchors walking down 58th Street, away from the Time Warner Center building, along with other CNN staffers.

Harlow and Sciutto each held two cell phones -- for getting updates and for communicating with the control room and hearing other guests. It was a surreal scene, having to report on the evacuation of the newsroom in real time.

CNN's New York bureau quickly set up other live shots for correspondents like Athena Jones. In the hours that followed, Wolf Blitzer and Jake Tapper led CNN's television coverage from DC while Harlow, Sciutto and 11 a.m. anchor Kate Bolduan reported from a nearby street corner.

Editors for CNN.com brought computers outside with them while writers captured photos and quotes for stories and social media. And the company's emergency alert systems -- typically only used for drills -- were used to send updates to staffers.

"The opinion team is at Maison Keyser editing. 'New Day' is at the diner. Digital is mostly at Hudson Hotel, and the staff here has been phenomenal to us," CNN Senior Vice President S. Mitra Kalita said around 11 a.m.

By that time, a huge swell of reporters from other outlets had gathered down the block from CNN on 58th Street and 8th Avenue. They sent updates to editors and producers via their cell phones as confused tourists walked by. Rumors spread about other suspicious packages. (Bombs were also sent to several other prominent targets of right-wing criticism.)

At the corner of 58th and 8th, the sound of a dozen phones blared simultaneously at one point, alerting those in the area of a shelter-in-place order.

As the situation unfolded, one of CNN's rivals, CBS News, reached out to offer help. CBS is located a few blocks away from CNN on the west side of Manhattan.

"Really nice to see from our fellow journalists," Zucker wrote in an internal memo.

An official from WeWork, the co-working startup with spaces all across the city, also offered free space to CNN employees.

In the afternoon, Zucker encouraged staffers who could work from home to do so, because the building still had not been reopened.

"I want to commend all of our colleagues in New York, in particular, and elsewhere, who have helped keep us on the air as this crisis has unfolded," Zucker added. "I am really proud of all of you. Thank you."

The New York newsroom was reopened around 3 p.m. Several NYPD officers were in the lobby of the Time Warner building.

Other major newsrooms are also taking precautions. At CNN's headquarters in Atlanta, where parts of the CNN Center complex are open to the public, "we are putting up magnetometers at the entrances to the building," Zucker told staffers. "We remain vigilant regarding security concerns across all of our global locations."