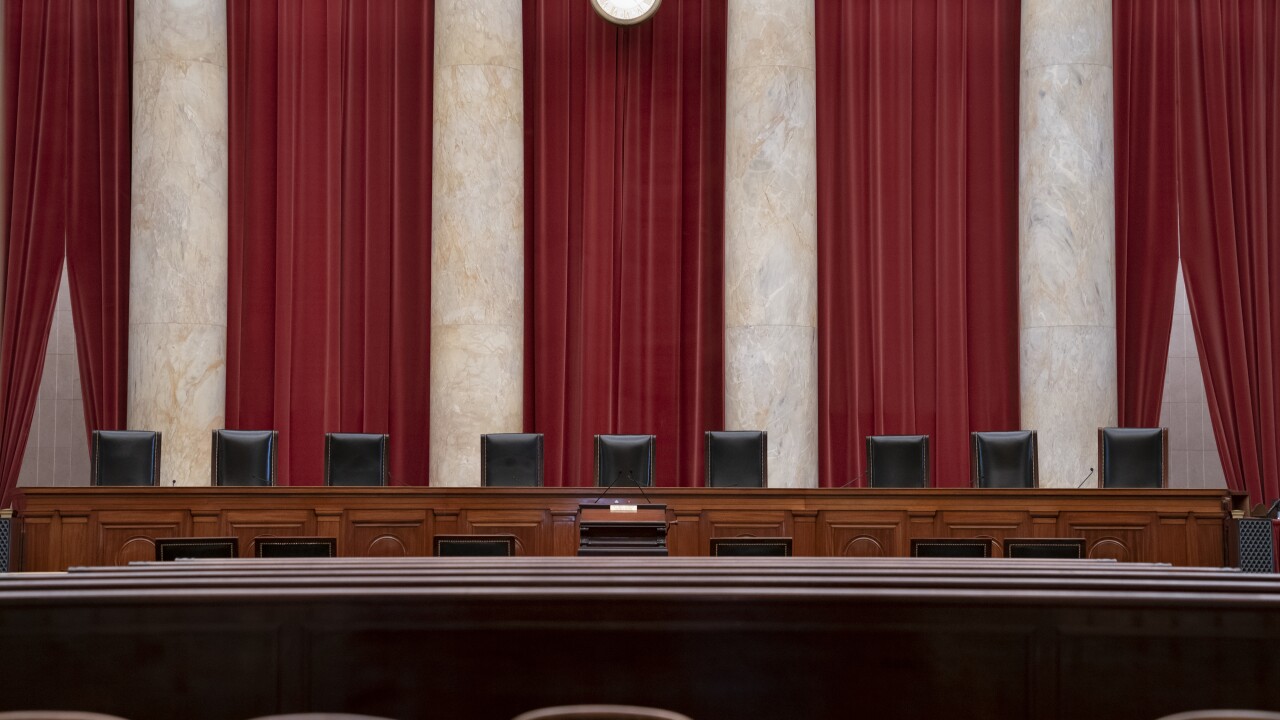 Copyright 2019 The Associated Press. All rights reserved.
J. Scott Applewhite/AP
FILE - In this June 2019 file photo the empty courtroom is seen at the U.S. Supreme Court in Washington as the justices prepare final decisions of the high court's term. The Senate is ready to move quickly on a Supreme Court nominee. President Donald Trump is expected Saturday, Sept. 26, 2020, to announce his replacement for the late Justice Ruth Bader Ginsburg. (AP Photo/J. Scott Applewhite, File)

Senate Majority Leader Mitch McConnell hasn’t yet said for certain whether a final vote will come before or after the Nov. 3 presidential election, just a little more than five weeks away, but Republicans are eyeing a vote in late October.

Ginsburg’s Sept. 18 death put the Senate in uncharted political terrain. A confirmation vote so close to a presidential election would be unprecedented, creating significant political risk and uncertainty for both parties. Early voting is underway in some states in the races for the White House and control of Congress.

A look at the confirmation process and what we know and don’t know about what’s to come:

WHO DID TRUMP PICK?

Trump on Saturday nominated Judge Amy Coney Barrett of Indiana, whose three-year judicial record shows a clear and consistent conservative bent. She is a devout Catholic and mother of seven, who at age 48 would be the youngest justice on the current court if confirmed.

It is up to the Senate Judiciary Committee to vet the nominee and hold confirmation hearings. The FBI also conducts a background check. Once the committee approves the nomination, it goes to the Senate floor for a final vote.

Senate Judiciary Committee Chairman Lindsey Graham of South Carolina, who faces his own tough reelection contest, has said he will move quickly on Trump’s pick. The nominee traditionally meets with individual senators before the confirmation hearings begin.

WHEN WILL THE HEARINGS START?

Graham has not yet announced a timetable. But if Republicans are able to complete all of the necessary paperwork and Barrett quickly meets senators, three or four days of hearings could start the first or second week of October.

WILL THERE BE A VOTE BEFORE THE ELECTION?

Republicans are privately aiming to vote before the election while acknowledging the tight timeline and saying they will see how the hearings go. McConnell has been careful not to say when he believes the final confirmation vote will happen, other than “this year.”

Senate Republicans are mindful of their last confirmation fight in 2018, when Christine Blasey Ford’s allegations of a teenage sexual assault almost derailed Brett Kavanaugh’s nomination. The process took longer than expected after Republicans agreed to allow Blasey Ford to testify. Kavanaugh, who denied the allegations, was eventually confirmed in a 50-48 vote.

DOES THE SENATE HAVE ENOUGH VOTES TO MOVE FORWARD AND CONFIRM?

McConnell does appear to have the votes, for now. Republicans control the Senate by a 53-47 margin, meaning he could lose up to three Republican votes and still confirm a justice, if Vice President Mike Pence were to break a 50-50 tie.

At this point, McConnell seems to have lost the support of two Republicans — Maine Sen. Susan Collins and Alaska Sen. Lisa Murkowski, both of whom have said they don’t think the Senate should take up the nomination before the election. Collins has said the next president should decide the nominee, and she will vote “no” on Trump’s nominee on principle.

CAN THE DEMOCRATS STOP THE VOTE?

There isn’t much they can do. Republicans are in charge and make the rules, and they appear to have the votes for Trump’s nominee, at least for now. Democrats have vowed to oppose the nomination, and they are likely to use an assortment of delaying tactics. None of those efforts can stop the nomination, however.

But Democrats will also make the case against Barrett’s nomination to voters as the confirmation battle stretches into the final weeks — and maybe even the final days — of the election. They say health care protections and abortion rights are on the line, and argue the Republicans’ vow to move forward is “hypocrisy” after McConnell refused to consider President Barack Obama’s nominee, Judge Merrick Garland, several months before the 2016 election.

HOW DOES THE CAMPAIGN FACTOR IN?

Republicans are defending 25 of the 38 Senate seats that are on the ballot this year, and many of their vulnerable members were eager to end the fall session and return home to campaign. The Senate was originally scheduled to recess in mid-October, but that now looks unlikely.

While some senators up for reelection, like Collins, have opposed an immediate vote, others are using it to bolster their standing with conservatives. Several GOP senators in competitive races this year — including Cory Gardner in Colorado, Martha McSally in Arizona, Kelly Loeffler in Georgia and Thom Tillis in North Carolina — quickly rallied to Trump, calling for swift voting.

HOW LONG DOES IT USUALLY TAKE TO CONFIRM A SUPREME COURT JUSTICE?

Supreme Court nominations have taken around 70 days to move through the Senate, though the last, of Kavanaugh, took longer, and others have taken less time. The election is fewer than 40 days away.

COULD THE SENATE FILL THE VACANCY AFTER THE ELECTION?

Yes. Republicans could still vote on Barrett in what’s known as the lame-duck session that takes place after the November election and before the next Congress takes office on Jan. 3. No matter what happens in this year’s election, Republicans are still expected to be in charge of the Senate during that period.

The Senate would have until Jan. 20, the date of the presidential inauguration, to act on Barrett. If Trump were reelected and she had not been confirmed by the inauguration, he could renominate her as soon as his second term began.

He did. McConnell stunned Washington in the hours after the death of Justice Antonin Scalia in February 2016 when he announced the Senate would not vote on Obama’s potential nominee because the voters should have their say by electing the next president.

McConnell’s strategy paid off, royally, for his party. Obama nominated Garland to fill the seat, but he never received a hearing or a vote. Soon after his inauguration, Trump nominated Neil Gorsuch to fill Scalia’s seat.

McConnell says it’s different this time because the Senate and the presidency are held by the same party, which was not the case when a vacancy opened under Obama in 2016. It was a rationale McConnell repeated frequently during the 2016 fight, and other Republican senators have invoked it this year when supporting a vote on Trump’s nominee.

Democrats say this reasoning is laughable and the vacancy should be kept open until after the inauguration.