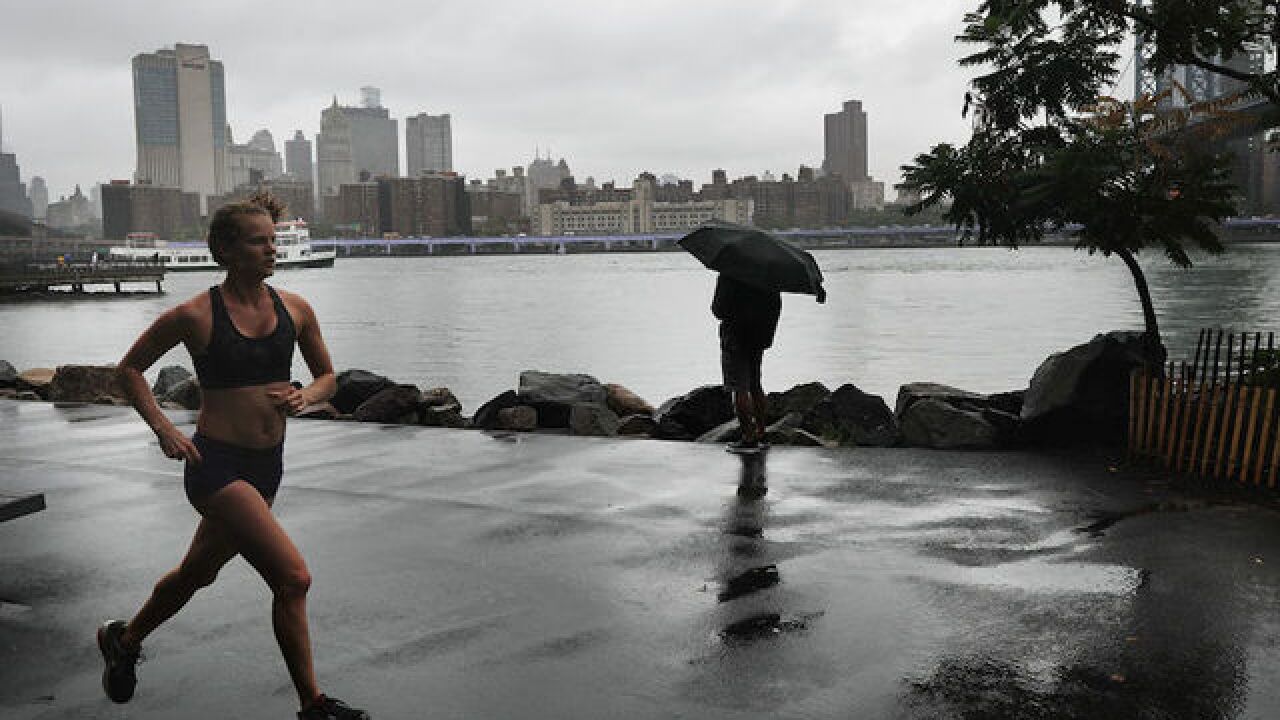 Image copyright 2018 Getty Images. All rights reserved. This material may not be published, broadcast, rewritten, or redistributed.
Spencer Platt
<p>A woman runs along a wet promenade in Brooklyn on July 25, 2018 in New York City. </p>

Heavy rain is forecast to continue falling in Pennsylvania and New York, with flood warnings in place Tuesday through Wednesday in some areas.

Rising water levels over the weekend and Monday prompted evacuations and emergency declarations in Pennsylvania where water rescues included that of 215 girls on a rafting trip.

Images posted to social media showed torrents of brown water sweeping through streets and under bridges.

The worst flooding has been west of Philadelphia to Reading and Allentown, CNN meteorologist Michael Guy said, with the heaviest rain set to move farther north into New England Tuesday.

Radar estimates suggest that the region that stretches from Baltimore to Philadelphia and up toward Wilkes-Barre have experienced rainfall of 2-4 inches since Saturday with locally higher amounts of up to 6 inches, Guy said.

The damp weather system is threatening areas of Northern Pennsylvania and Southern New York already saturated from a previous heavy rain last week. CNN's meteorologist said another 1-2 inches is set to fall across central New York state Tuesday as the system slowly moves toward the north.

Central Pennsylvania up through eastern portions of New York State are under a flood watch.

The National Weather Service (NWS) warned that river and flash flooding was possible overnight Monday into Tuesday with rainfall of up to 3 inches possible by daybreak in New York and Pennsylvania.

"If venturing out tonight, remember to Turn Around, Don't Drown," the NWS warned on Twitter.

The Pennsylvania Emergency Management Agency (PEMA) said heavy rainfall over the weekend and Monday resulted in a number of flash floods and nine counties had activated their emergency operations centers in response.

More than 8,000 power outages had been reported and several shelters had been opened for residents affected by flooding, spokeswoman Dougherty said.

Sullivan County was among the counties to declare an emergency. Brian Hoffman, the county's commissioner told CNN that three water rescues were carried out Monday and 30 residents had been evacuated from an unincorporated town known as Sonestown.

John Lewis, deputy director of emergency services for Lackawanna County, told CNN there were evacuations and rescues throughout the county.

Carbon County rescuers were dispatched Monday evening after reports that 215 rafters needed to be rescued from the Lehigh River, CNN affiliate WNEP reported.

The rafters were girls ages 12 to 16, rescue crews said.

Officials said 46 of the girls were rescued from the river near Lehighton while others were found further down the river -- some hanging from trees, WNEP said. One girl was taken to hospital for treatment and later released.

"In Benton, Columbia County, PA water is receding off of Main Street, but Fishing Creek is running fast and furious and doing whatever it wants," WNEP photographer Michael Erat tweeted.

Emily Cunningham recorded video of a camper floating down the creek in Bloomsburg, Columbia County. Posting the footage to Facebook, she said it was the second camper she had seen floating by.

Timothy Gad used a drone to video the swollen Lehigh River in Slatington, Lehigh County, PA. The town is a few miles away from where it's reported rescue crews were looking for possible missing rafters.

"Lehigh River! I've never seen it this high or wide before it has to be at least 50 ft wider than normal," Gad said.

Meanwhile, Pine City, New York, resident Shellie Easton shared footage on Facebook of the view from her second-story apartment, which was surrounded by floodwater. "The creek is overflowing and this is my house," she said in the video, shot at 2:40 p.m. ET Monday. "Literally this happened within seconds."

The video shows her car, the street and the neighborhood inundated with rushing brown water.