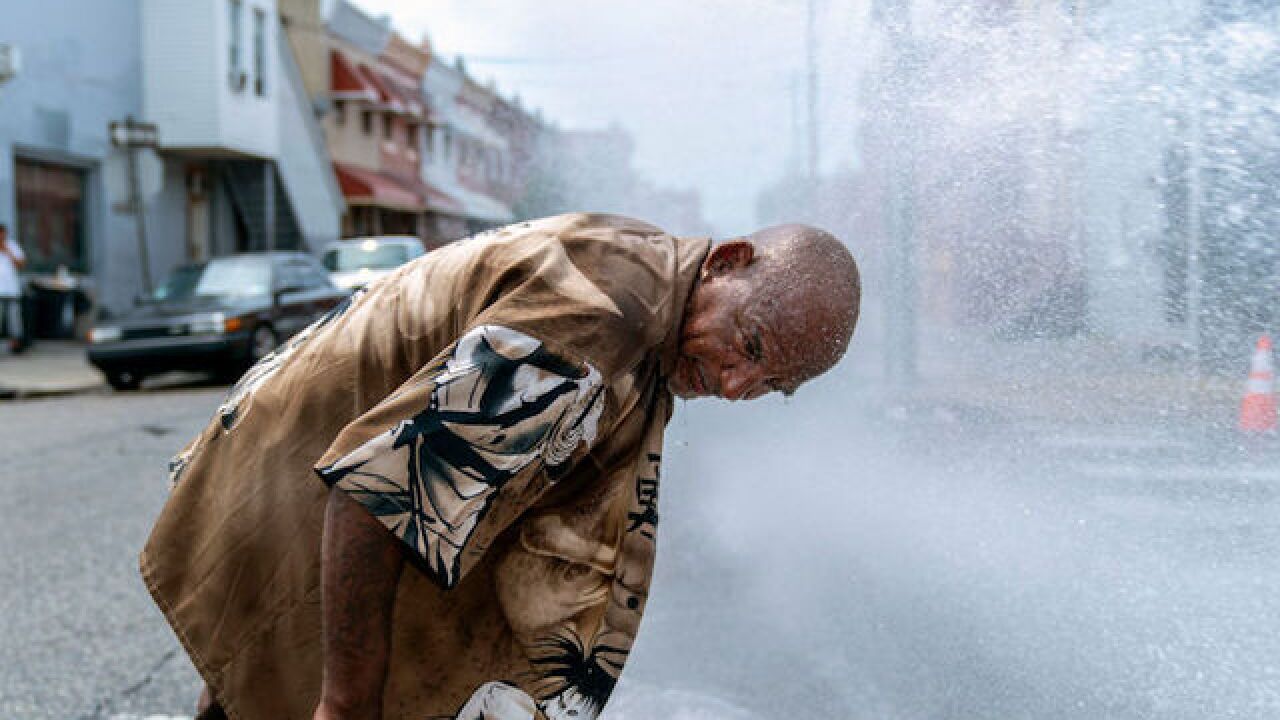 Image copyright 2018 Getty Images. All rights reserved. This material may not be published, broadcast, rewritten, or redistributed.
Jessica Kourkounis
<p>Eduardo Velev cools off in the spray of a fire hydrant during a heatwave on July 1, 2018 in Philadelphia, Pennsylvania. An excessive heat warning has been issued in Philadelphia and along the East Coast as hot and humid weather hits the region this week. </p>

Nearly 80 million people remain under a heat advisory or warning Tuesday, with scorching temperatures and humidity expected through the Fourth of July.

Some places in the East may feel as hot as 100 to 110 degrees when taking into account the humidity and heat Tuesday, with advisories and warnings stretching from central Virginia to eastern Maine.

The recent heat wave has left at least one person dead and two other deaths under investigation.

A woman died Saturday in Pennsylvania while working in her garden in a heat-related death, according to the Blair County coroner's office. The woman went into cardiac arrest at her home and died at a local hospital.

Two possible heat-related deaths are being investigated in Kansas City, Missouri. The deaths involve a man in his 80s, who died Monday, and a woman in her 40s, who died last week, according to the Kansas City Health Department.

Nearly 100 million people could see temperatures climb above 95 degrees Fahrenheit this week, with a majority of those residing in the eastern third of the nation.

Excessive-heat warnings and advisories are posted for much of New York and New Jersey, with heat index values up to 105. Heat index is what it actually feels like outside when you take into account the humidity and the high temperature.

While temperatures topping 90 degrees are not too uncommon for New York City, it is rare to see the heat last more than a couple of days. The city could top 90 for up to 7 consecutive days this week -- something the National Weather Service in New York has said happens about once every 33 years.

Prolonged heat could be expected through Thursday -- with heat index values up to 105 for northeast New Jersey during the peak of the heat on Tuesday, according to NWS New York.

"Heat related illnesses possible through this time period, especially for at-risk populations such as the elderly, very young, and those with mental illnesses," NWS New York warned.

Residents are warned to "drink plenty of fluids, stay in an air-conditioned room, and stay out of the sun," the agency says.

Temperatures are expected to be 10 degrees above normal across New England, according to NWS. Relief could be days away, as the forecast is that temperatures will return to the mid-80s in the East near the end of the week.