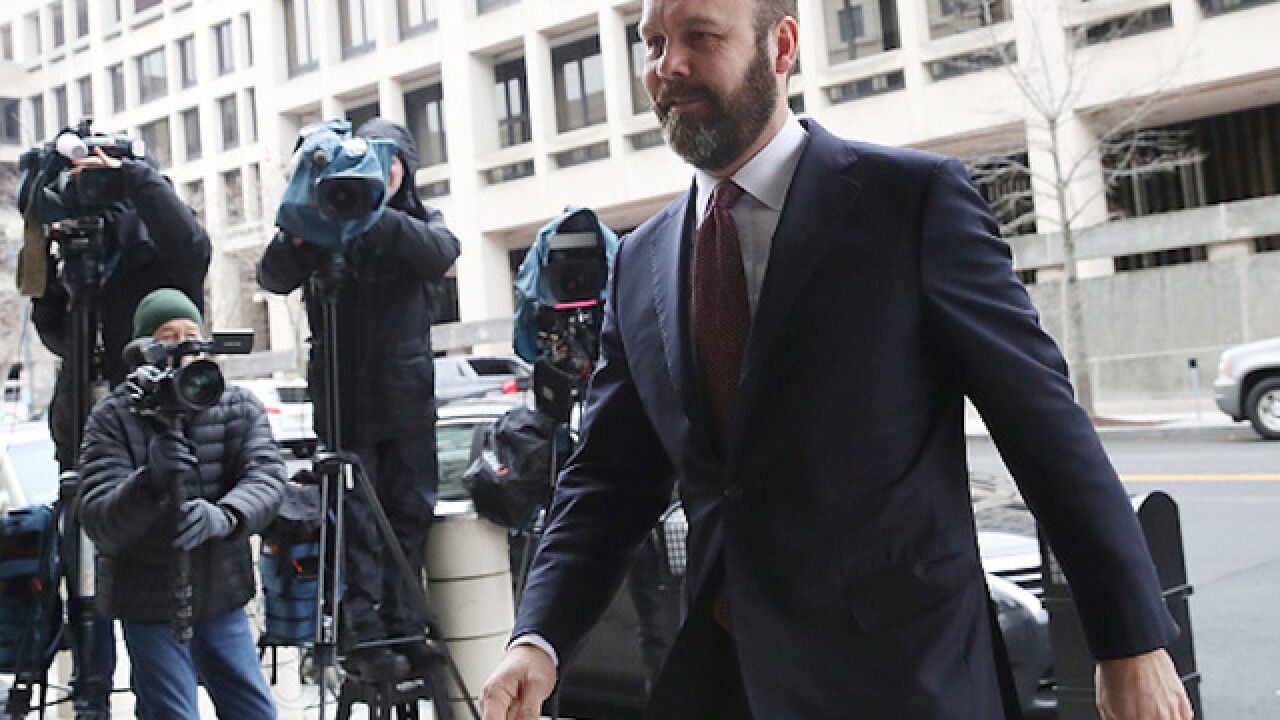 Copyright 2018 Scripps Media, Inc. All rights reserved. This material may not be published, broadcast, rewritten, or redistributed.
Mark Wilson
<p>WASHINGTON, DC - FEBRUARY 23: Richard Gates arrives at the Prettyman Federal Courthouse for a hearing February 23, 2018 in Washington, DC. Gates is expected to plead guilty to a 12-charge indictment that includes money laundering and conspiracy. (Photo by Mark Wilson/Getty Images)</p>

Paul Manafort's longtime deputy Rick Gates admitted in court Tuesday to having an extramarital affair a decade ago, but denied the contention from Manafort's attorney that he stole money to pay for it.

Manafort's defense lawyer Kevin Downing raised Gates affair in cross-examination, peppering Gates with questions about what he dubbed "the secret life of Rick Gates." Downing said Gates was living in London and other cities and using Manafort's money from offshore accounts to fund the affair.

Gates acknowledged the affair but said the money came from bonuses.

The exchange occurred after Gates testified against his former boss on Tuesday that Manafort used email to direct Gates to transfer money through offshore accounts.

On Tuesday, prosecutors began to show emails between Manafort and Gates that appear to confirm Gates' story that Manafort sought to move money that his consulting company had earned from Ukraine through Cypriot accounts.

"There were hundreds of these," Gates testified.

Gates had written to Manafort about transferring money from one of Manafort's shell companies, Leviathan Advisors Limited, to their aboveboard consulting group, DMP International. "Unless you approve otherwise," Gates ended his note proposing the transfer.

"This works. Proceed as you lay it out below," Manafort wrote back, signing his email with the letter "P."

The subject line of the email was "Payments."

Gates is testifying for the second day against Manafort, detailing their use of foreign accounts as well as Manafort's financial troubles.

"WTF," Manafort wrote. "How could I be blindsided like this. You told me you were on top of this. We need to discuss options. This is a disaster."

Gates' testimony against Manafort follows his decision to plead guilty in February and to cooperate with special counsel Robert Mueller's team.

On Monday, Gates testified that he and Manafort had 15 foreign accounts they did not report to the federal government, but he also told jurors he had cheated Manafort out of "several hundred thousand" dollars, which is likely to be a thread Manafort's attorneys pull on to try to undermine Gates' credibility with the jury.

Manafort is charged with 18 counts of tax and banking crimes, and has pleaded not guilty to all charges.

The trial itself is not about the work Manafort did on the Trump campaign. But Gates' testimony pits two former senior Trump campaign aides against each other. After Manafort left the campaign in August 2016 amid swirling questions about his Ukraine work, Gates stayed on the campaign and later helped found a pro-Trump advocacy group, before he was ultimately forced out, too, as questions mounted about Manafort.

Gates told jurors Tuesday that the "typical practice was Mr. Manafort would send me a list of wire requests." Manafort would also send the wire transfer requests to their Cyprus-based law firm, Gates said.

At some point during the European banking crisis, Manafort's law firm in Cyprus that oversaw the legal process of setting up the accounts moved them to the country St. Vincent and the Grenadines in the Caribbean. Around that time, Manafort asked for his name to be removed from the bank account registrations, Gates said. Gates said his name was taken off some but not all legal documents in the foreign country.

Gates said Manafort especially wanted to avoid having his name listed in any documents linked to the accounts because he was embroiled in a lawsuit with someone in Ukraine.

Dressed in a dark navy suit and light blue tie, Gates has answered questions posed to him directly and with swiftness, showing little emotion.

Gates appeared a bit more willing to glance at the defense table and at his former boss than on Monday afternoon. Manafort has watched him intently throughout his testimony.

As he described in detail the steps Manafort and his associates took to set up the Cypriot accounts, Gates spoke directly to the jury.

The jurors have largely kept their poker faces throughout the proceedings -- though a few have sat forward in their chairs for Gates' testimony. Ellis has refrained from reprimanding the prosecutors so far Tuesday.

Gates described the financial issues that Manafort and his various entities began to experience in 2015 and 2016, describing how vendors would reach out to him and Manafort because "loans had not been paid."

By late 2015, Manafort's consulting group DMP had no clients, according to Gates. He said they were attempting to secure another political consulting contract in Ukraine but had not been able to.

Gates said that during this time he also supplied false information to banks in order to help Manafort secure bank loans. He admitted to altering the profit and loss documents, which he said was per Manafort's direction.

Gates explained how he was hired to work on the Trump campaign, although he did not name Trump. Gates said he was paid for the campaign work through savings and investments from Manafort, though he had additional outside income.

In January 2016 Manafort asked Gates to refinance a property in New York on Howard Street -- a property that Manafort never lived in because he stayed at his Fifth Avenue apartment when he was in the city, but still claimed to use as a second home in order to secure maximum benefits for the mortgage refinance loan, Gates said.

Another email prosecutors showed and Gates confirmed came in 2015, from the Russian Konstantin Kilimnik to Gates discussing money a Ukrainian client had not yet paid Manafort's firm through the accounts.

At the time, Manafort was dry on cash and beginning to panic, prosecutors say. They have alleged that around this time he was using the hollow foreign accounts to help him reduce the taxes he paid to the US government and defraud at least one bank into giving him a loan.

"This is to calm Paul down," Kilimnik wrote to Gates. "I think the wire will go next week realistically." Gates told the court that "Mr. Manafort was quite upset money had not been sent," and Kilimnik wanted to show the boss they were making the effort.

That contract for 1 million euros, with Ukrainian Sergei Lyovochkin and executed between shell companies both sides used, was never paid in full.

Gates started his testimony Tuesday by getting into the gritty details of how much money each Ukrainian billionaire contracted Manafort for, showcasing exactly how much money was flowing into the hidden Cypriot accounts in 2011 and 2012. It amounted to at least 5 million euros, Gates said.

Working for Manafort, Kilimnik would collect the agreements and execute them, Gates said.

Manafort reported some of the payments to tax authorities in the US as loans -- though they were income, Gates said. He was "trying to decrease his taxable income," Gates said.