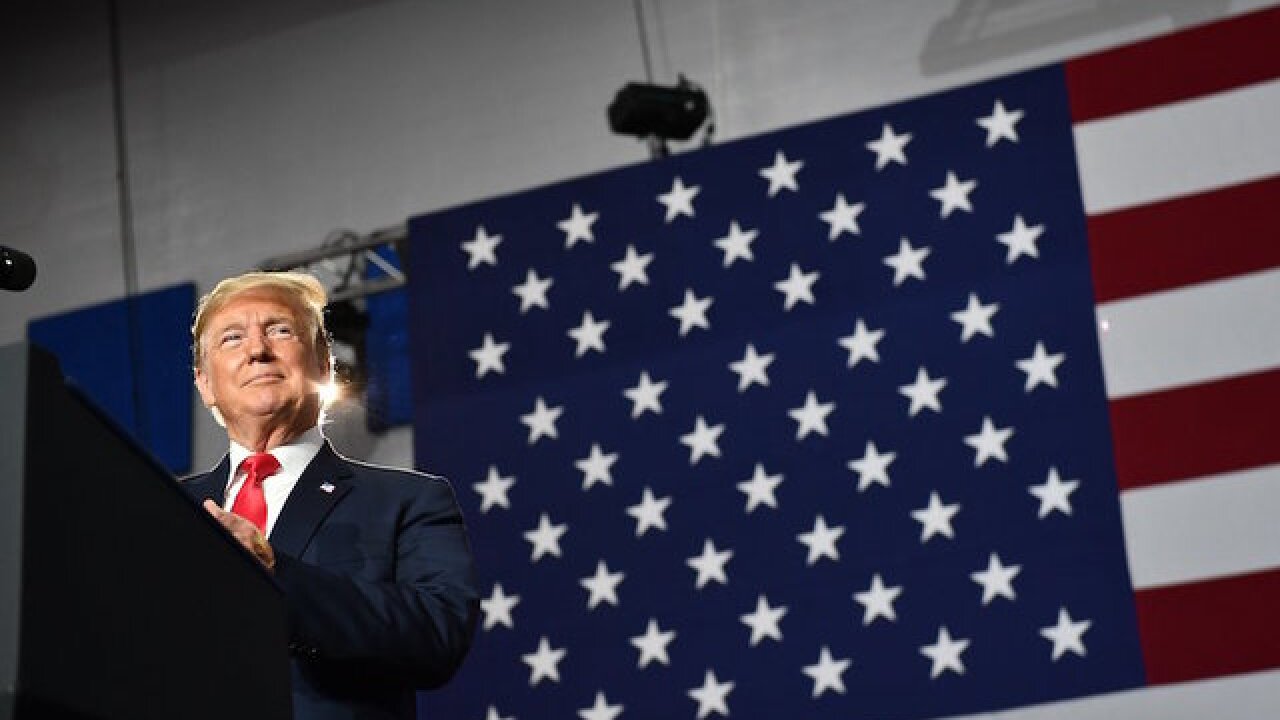 President Donald Trump has injected himself into two high-stakes contests taking place on Tuesday, turning both into new tests of Trump's tactics and sway with Republican voters.

In a special election in Ohio 12th District, Republicans are scrambling to avoid an embarrassing defeat in a seat that the party has held for decades. Trump has backed Republican Troy Balderson, who is facing Democrat Danny O'Connor in the last special congressional election before November's midterm elections. A win for Democrats here on Tuesday would signal further danger for Republicans in the fall.

The party previously lost a similar race in Pennsylvania and saw one in Arizona get too close for comfort.

In the Republican primary for Kansas governor, Trump on Monday endorsed Kris Kobach, the Kansas secretary of state known for his crusade for restrictive voting laws, over incumbent Gov. Jeff Colyer. In doing so, he ignored the pleas of the Republican Governors Association to stay out of the race. Kobach is widely seen as uniquely vulnerable in a general election due to his controversial national profile.

The two races will garner the most national attention on a day when four states hold primary elections: Kansas, Michigan, Missouri and Washington.

Tuesday's elections carry high stakes for Democrats, too -- with races in Kansas, Michigan and Missouri, where the progressive left hopes to defeat more moderate candidates.

A tight race in Ohio

Trump visited Ohio's 12th District on Saturday and appeared on stage with Balderson at a rally designed to jolt conservatives into turning out to vote in an election that will gauge where the Republican Party stands less than three months before the midterms.

But it isn't entirely clear if Trump's support will ultimately help or hurt Balderson on Tuesday.

The day after Trump's appearance, Ohio Gov. John Kasich, a prominent GOP critic of Trump, said he asked Balderson if he invited Trump at all into the district in the Columbus suburbs -- the sort of area where Republicans have lost voters who rebelled against Trump in previous special elections. "He said, 'No, I didn't,'" Kasich said of Balderson on ABC's "This Week."

Balderson's campaign manager did not dispute Kasich's claim Monday, instead declining to comment directly on it.

"Suburban women in particular here are the ones that are really turned off," Kasich said. "It's really kind of shocking because this should be just a slam dunk and it's not."

A Monmouth University poll released last week showed a one-point race, with Balderson receiving 44% support to O'Connor's 43%, with 11% of respondents saying they are undecided.

On stage with Trump, Balderson called himself "someone who will fight for President Trump's economic agenda."

The night before the rally, Trump took to Twitter to attack LeBron James, calling the NBA star dumb just days after James, an Ohio native, poured tens of millions of his own dollars into the opening of an innovative public school in Akron.

Republicans have pumped money into the race in hopes of avoiding another special election embarrassment. The Congressional Leadership Fund has spent nearly $3 million on television and radio ads, and the National Republican Congressional Committee has spent another nearly $1 million on ads.

The pro-Balderson effort has focused largely on motivating Republican voters by casting O'Connor as extreme. Trump claimed House Democratic leader "Nancy Pelosi controls Danny O'Connor, whoever the hell that is." The Congressional Leadership Fund's ads have similarly latched O'Connor to Pelosi. They've also bashed him on immigration, attaching him to calls to abolish ICE.

Democrats, meanwhile, have been attacking Balderson by casting his support of tax cuts as threats to Social Security and Medicare.

On Twitter, Trump called Kobach a "strong and early supporter of mine."

"He is a fantastic guy who loves his State and our Country - he will be a GREAT Governor and has my full & total Endorsement! Strong on Crime, Border & Military. VOTE TUESDAY!" Trump tweeted.

Kansas is a deep-red state -- Trump won there by 20 percentage points in 2016 -- and any Republican would be favored in the gubernatorial election in November.

But Democrats believe momentum from this spring's protests over education funding against Republicans who control the state government could make the state surprisingly competitive this fall. And Kobach -- who publicly backed Trump's false claim that millions of people voted illegally in 2016 and who advocates a hard-line approach to immigration -- could alienate Republican voters in areas like the Kansas City and Wichita suburbs.

The concern extends to Kobach's potential impact on two potentially competitive congressional races in Kansas, too -- including Rep. Kevin Yoder's re-election bid in the 3rd District, a top Democratic target.

A test for the left

After Alexandria Ocasio-Cortez's stunning victory in New York against Rep. Joe Crowley, progressives hope to demonstrate that their policies can win over voters in the middle of the country.

Tuesday's elections could provide a window into the direction of the Democratic Party as the 2020 presidential nominating contest gets underway and party leaders debate whether to embrace a more liberal platform in hopes of turning out voters who sat out the 2016 election or make a centrist turn to court moderates and Republicans who are alienated by Trump.

In Kansas' 3rd District, Bernie Sanders-backed labor lawyer Brent Welder is running in a six-way primary to take on Yoder. Other top candidates include Sharice Davids, an EMILY's List-endorsed former MMA fighter attempting to become the first Native American lesbian in Congress, and Tom Niermann, a teacher running a more moderate campaign with a long list of local officials' endorsements.

And in Missouri's 1st District, Democratic Rep. William Lacy Clay faces a challenge from the left from Cori Bush, a nurse and activist who has campaigned with Ocasio-Cortez.