Chris Watts confessed to his father that he killed his wife in a rage, new video shows 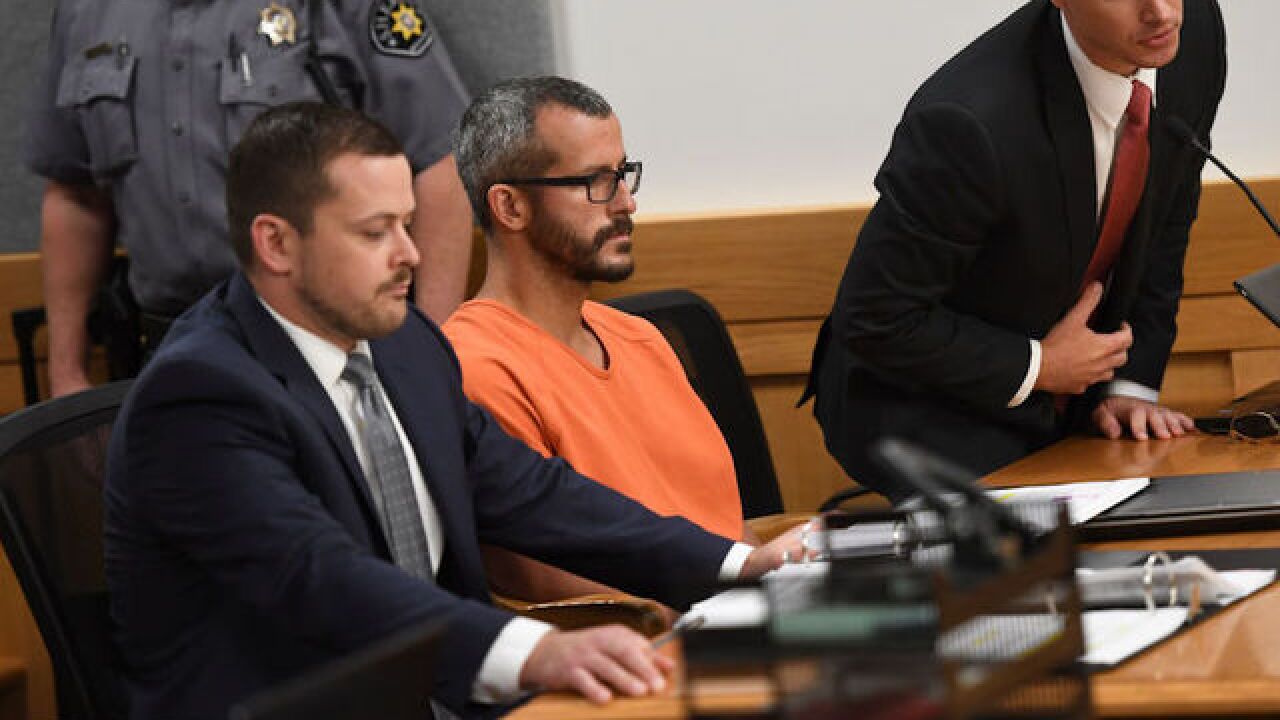 Image copyright 2018 Getty Images. All rights reserved. This material may not be published, broadcast, rewritten, or redistributed.
RJ Sangosti
<p>Christopher Watts is in court for his arraignment hearing at the Weld County Courthouse on August 21, 2018 in Greeley, Colorado. </p>

Two days after Chris Watts' family vanished, he asked to see his father as he was being questioned by investigators in Colorado.

In a bare white room at the Frederick Police Department, he told his father that he'd "freaked out" and killed his wife in a fury after a fight over plans to separate, according to newly released video from the Weld County District Attorney's office.

"Oh my God," his father said, dropping his head into his hands.

Shanann Watts and the couple's two daughters -- Bella, 4, and Celeste, 3 -- were reported missing August 13. After denying for days that he was involved, Chris Watts told his father on August 15 that he'd killed his wife because he saw her smothering their two daughters to death, the video shows.

But prosecutors said he killed his pregnant wife and two daughters. He was sentenced this month to five life sentences with no possibility of parole after pleading guilty to the murders.

Investigators released new videos and audio Thursday detailing some of the interactions they had with Watts and his mistress after his family was reported missing.

In one of the videos, investigators questioned him for a while and gave him a polygraph test, which he failed.

Watts said he didn't know where his wife and children were, and he wanted them back home. Investigators urged him to tell the truth about what happened to his family, at which point Watts asked to speak to his father, Ronnie Watts.

In the new video, he told his father he had gone downstairs after a teary and emotional conversation with his wife about a separation. When he returned upstairs, he said, he found she had smothered or strangled their daughters to death.

"I freaked out ... and did the same thing to her," Watts told his father, at times mumbling inaudibly. "That's just it ... rage."

"Oh my God," Ronnie Watts responded, before reassuring his son that he'd love him no matter what and they'll get a good lawyer.

Chris Watts also told investigators that he'd had an affair with a new woman and was no longer in love with his wife. In an audio tape obtained by the Denver Post, investigators talked to Nichol Kessinger, the coworker with whom he allegedly had an affair.

He texted and called mistress after the killings

Investigators also released a two-hour audio tape in which Watts' alleged mistress shared details of their relationship, the Denver Post reported. She said the two met either in June or May. At the time, he did not have a wedding ring but told her about his two children.

"He mentioned that he did have a significant other .... but that those two were in the process of a separation," she said. Kessinger said the short time they were together, she did not sense any red flags. She described him as kind and introverted.

Kessinger said she had been to his house twice, but he still lived with his wife so they spent more time at her house.

During one of her visits, she said, she saw a picture of his wife and children, and asked him why he did not want to try and keep his family together. He told her he'd tried to salvage his relationship with his wife but it didn't work, she said.

When reports of his wife's disappearance made the news, Kessinger found out that Shanann was 15 weeks pregnant and confronted him about the lie. That's when she decided to talk to investigators.

'It was the lie that made me question everything else that he'd been telling me," she said in the audio. "I just cut him out of my life."

Kessinger told investigators that when she found out Shanann Watts had disappeared, she initially believed Shanann had moved out of the house she shared with Chris.

She called and texted him with questions, and he changed his story about the divorce, showed little emotion about his family's disappearance and appeared more concerned about maintaining their relationship, she told investigators.

At that point, she cut him off and told him not to talk to her until his family was found. In the audio, Kessinger cries while talking to investigators about Watts' children.

"Those poor babies," she said.

Prosecutors have revealed horrific details of how Watts killed his wife and smothered their daughters.

Watts strangled his wife with his bare hands, not in an uncontrolled rage as he had claimed, but deliberately and viciously for at least 2 minutes. He then suffocated Bella and Celeste. While Bella fought back, Celeste had no external injuries, prosecutors said.

He then backed his vehicle into the driveway, loaded up the bodies in three trips and drove them to a work site, a place he suspected they'd never be found. He buried his wife in a shallow grave before stuffing his daughters into tanks.

When his coworkers arrived at the site later that morning, they described his behavior as perfectly normal, prosecutors said. As law enforcement officials searched for the woman and girls, Watts was texting his new girlfriend about their future, prosecutors said.