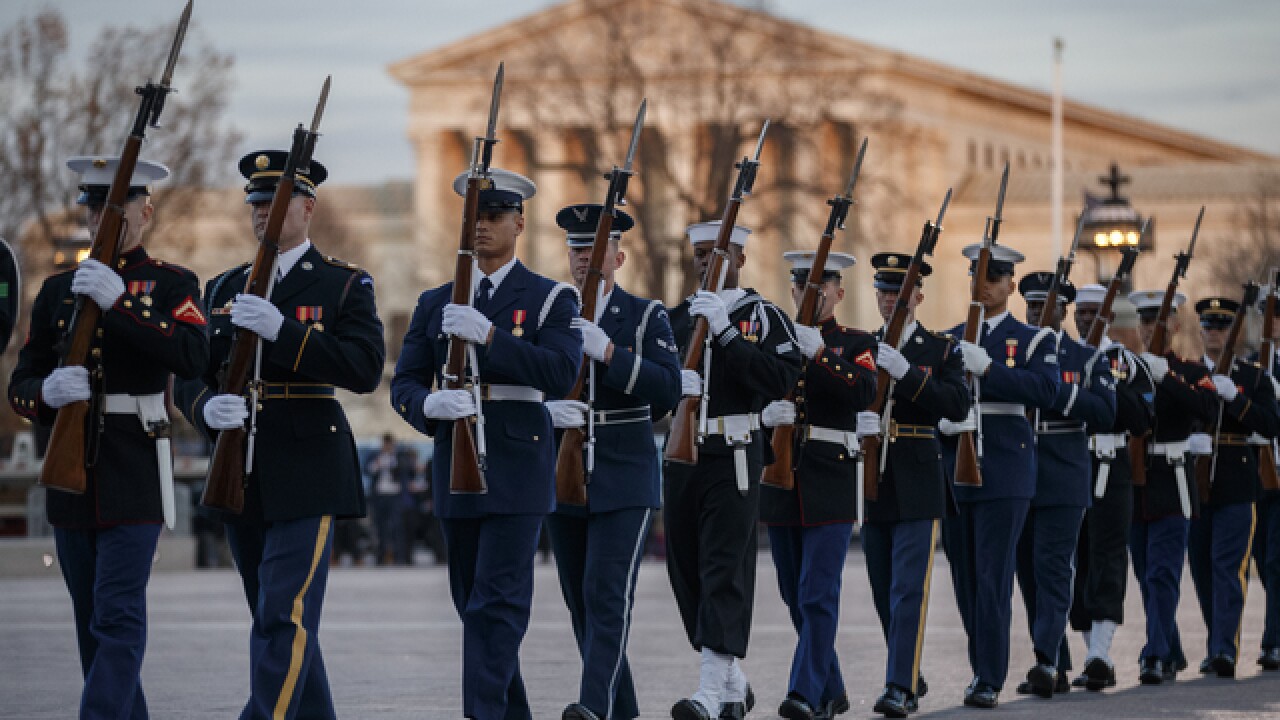 Copyright 2018 Scripps Media, Inc. All rights reserved. This material may not be published, broadcast, rewritten, or redistributed.
Pool
WASHINGTON, DC - DECEMBER 03: Members of a joint service honor guard march as the body of former U.S. President George H.W. Bush arrives at the U.S Capitol Rotunda on December 03, 2018 in Washington, DC. A WWII combat veteran, Bush served as a member of Congress from Texas, ambassador to the United Nations, director of the CIA, vice president and 41st president of the United States. A state funeral for Bush will be held in Washington over the next three days, beginning with him lying in state in the U.S. Capitol Rotunda until Wednesday morning. (Photo by Shawn Thew - Pool/Getty Images)

In a deeply divided political climate, Washington witnessed a rare moment of unity on Monday as lawmakers from both sides of the aisle came together to remember George H.W. Bush.

The Republican former President died on Friday at the age of 94. On Monday, his body was brought to the US Capitol rotunda where Bush will lie in state until Wednesday morning, an honor reserved for government officials and military officers.

Democrats and Republicans remain locked in a standoff over funding for President Donald Trump's border wall that could trigger a partial government shutdown in the coming days and Washington is still reeling from a divisive midterm campaign season where the leaders of both parties were targets and Trump frequently went on the attack on the campaign trail.

But for at least a few hours, the two parties appeared to put their political differences aside.

As crowds began to gather outside, a ceremony was held inside the rotunda where Capitol Hill's highest-ranking Republican and Democratic lawmakers joined together in paying tribute to the former President.

Senate Majority Leader Mitch McConnell and Senate Minority Leader Chuck Schumer stood side-by-side as a wreath was placed alongside the casket. In another image of unity, House Speaker Paul Ryan and House Democratic Leader Nancy Pelosi did the same several minutes later, standing next to one another as a second wreath was placed.

Pelosi, who is vying to become House speaker when Democrats take control of the House of Representatives in the new Congress, stood next to Kevin McCarthy, who will serve as the House Republican leader in the next Congress, as lawmakers filed in at the start of the event and the two could be seen speaking to one another.

Earlier in the day, McConnell and Schumer both gave speeches on the Senate floor praising the former President.

"He embodied the characteristics we admire in a president: integrity, civility, dignity, humility," Schumer said during his speech. The Senate Democratic leader added, "I knew him to be a fine man. A decent man. And even when he opposed your views, you knew he was doing what he thought was best for the United States of America."

A long list of prominent current and former officials gathered inside the rotunda to pay their respects.

Vice President Mike Pence delivered a speech. Prominent former lawmakers, including former Senate Majority Leader Republican Bill Frist, were seen at the Capitol as were sitting Supreme Court justices, including Clarence Thomas, who was nominated to the bench by Bush.

Outside the Capitol, a long line of people waiting to pay their respects to the 41st President began to form early in the evening. Starting at around 7:30 p.m. ET on Monday, members of the public began to be allowed into the rotunda to view the casket.

Joe McGarvey, a 62-year old Democrat, was one of the people who waited in line to pay his respects to what he described as "a man who gave a life of service to the country."

"I'm a Democrat, but as President, he did a lot of good things," McGarvey said during a brief interview. He described Bush as a "very humble, caring person -- you could tell, just how he treated people."

As McGarvey waited, the temperature began to drop. "It's getting a little cold here," he said, "even though I'm standing out here in the cold, I'm glad I did it."

Stephen Keblish and Nate Crossett from Utica, New York said they had driven down to Washington, DC that morning.

Keblish described it as a "once in a lifetime kind of opportunity."

"It's a sort of pilgrimage in a way. There aren't a lot of opportunities for ritual in this day and age especially as a country so I wanted to partake in something like that," he added.

Christine Dube, who lives in Vermont, but travels to DC periodically for work, said she believes Bush was from an era where people did "the right thing and you care about America and that comes first."

"I think maybe people need to start thinking about that a bit more," she said, "following that set of values, not fighting with each other, agreeing to disagree, doing what we're supposed to do, take care of each other ... not be at odds with each other all the time."

"Our country needs to come together," Dube said, adding, "Regardless of what your political views are, I think everybody at heart wants to see our country do well."

Among those also paying respect Monday evening: the President and first lady Melania Trump, who stood in front of Bush's casket in the Rotunda at around 8:30 p.m. ET.