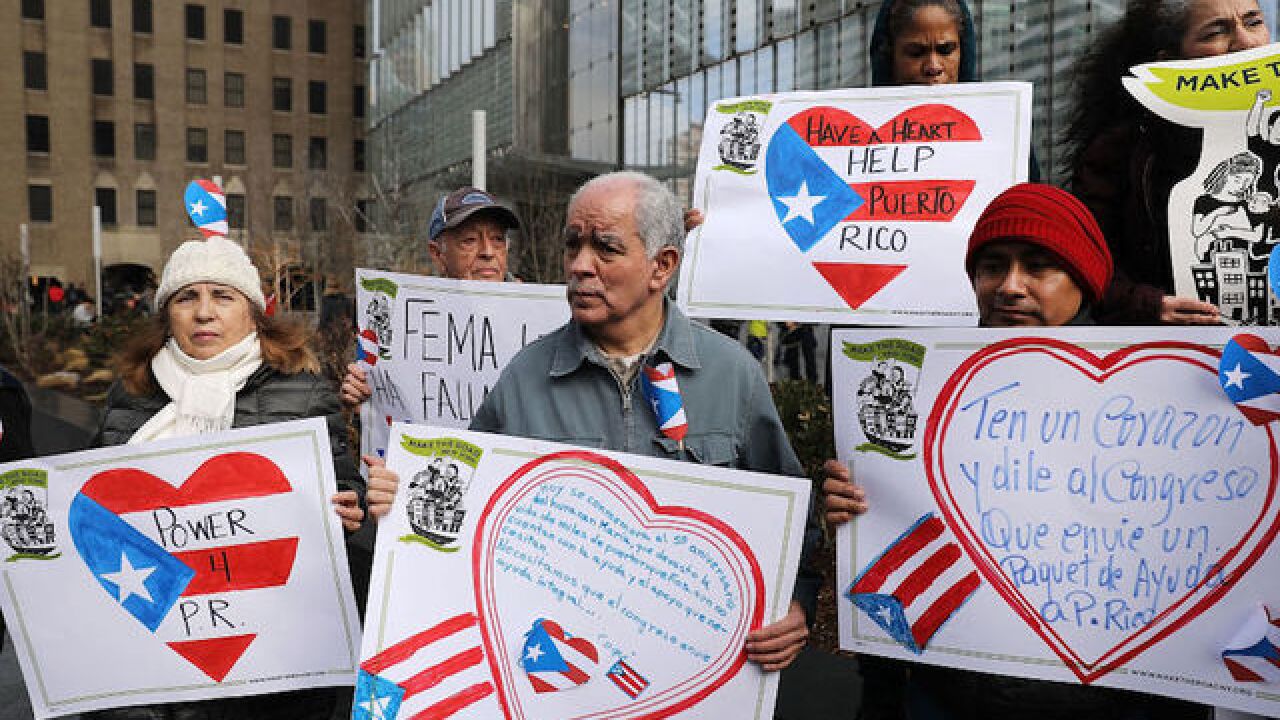 Image copyright 2018 Getty Images. All rights reserved. This material may not be published, broadcast, rewritten, or redistributed.
Spencer Platt
<p>Puerto Rican activists and others participate in a protest outside of New York City's Federal Emergency Management Agency (FEMA) office to call on Congress and FEMA to deliver the aid and resources thousands of Puerto Ricans desperately need to recover on February 20, 2018 in New York City. Nearly six months after Hurricane Maria delivered category 4 destruction to the U.S. territory of Puerto Rico, thousands of island residents were still without running water or electricity. </p>

Nearly 1,800 Puerto Ricans were expected to move out Sunday from hotels on the island and the US mainland but Judge Leo T. Sorokin, of the US District Court for the District of Massachusetts, ordered FEMA to extend the program until midnight on Tuesday, according to court records.

The order will allow families to stay at least until check-out time on Wednesday, the judge explained. The temporary injunction comes after national civil rights group LatinoJustice PRLDEF filed a class action lawsuit in an attempt to block the eviction of the evacuees.

"There is no question that FEMA's response to Puerto Ricans after Hurricane Maria has been woefully inadequate and unlike responses to other natural disasters experienced in the U.S.," Kira Romero-Craft, managing attorney for the group's southeast office said in a statement.

Romero-Craft also said the idea that too much has been done for evacuees is false.

"We must continue to care for the most vulnerable members of our community to ensure the safety and not further endanger their lives," she added.

A hearing on the case has been scheduled for Monday.

Hundreds of families are stuck in motels from New York to Florida. They have been cooking makeshift meals in microwaves, doing homework in hotel lobbies and learning the ways of life on the mainland.

Some have relocated five or six times to avoid sleeping on the streets.

Designed to be used for about two weeks, the Transitional Sheltering Assistance program has been extended repeatedly.

"After 10 months of providing emergency shelter through Transitional Sheltering Assistance (TSA), FEMA is ending the program on June 30 for Hurricanes Harvey, Irma and Maria survivors," the agency said in a statement. "Intended to provide emergency shelter, TSA is a temporary solution that bridges survivors into more permanent options."

FEMA spent more than $432 million on lodging for tens of thousands of hurricane survivors who were left with no power or running water, damaged or destroyed homes and no school for their children, according to the agency.

They are about to face more uncertainty. Many are expected to end up sleeping in cars or homeless shelters, officials said.

Liz Cruz, her husband and three children have been staying in a Manhattan hotel since early December.

"First, there was the trauma of the hurricane," she said. "Then we had the trauma of leaving home and spending months in a small room in New York. Now comes this trauma."

Milagros Bosse, 32, a Marine Corps veteran who arrived in New York in December with her four young children, received numerous calls and emails from FEMA reminding her the agency will not pay for the hotel after Saturday.

On Friday, she checked out of a Manhattan hotel and intended to move into a former boutique hotel now used as a shelter for homeless families. There were no rooms available, she said.

They were taken instead to another hotel, where she said the walls were dirty. There was a hole in a bathroom wall.

"The kids and I cried," Bosse said. "They have begged me to please go back to the FEMA hotel, that they will behave better ... and I had to look into their eyes and say, 'I am sorry but we cannot go back there because our assistance with FEMA has ended.' "