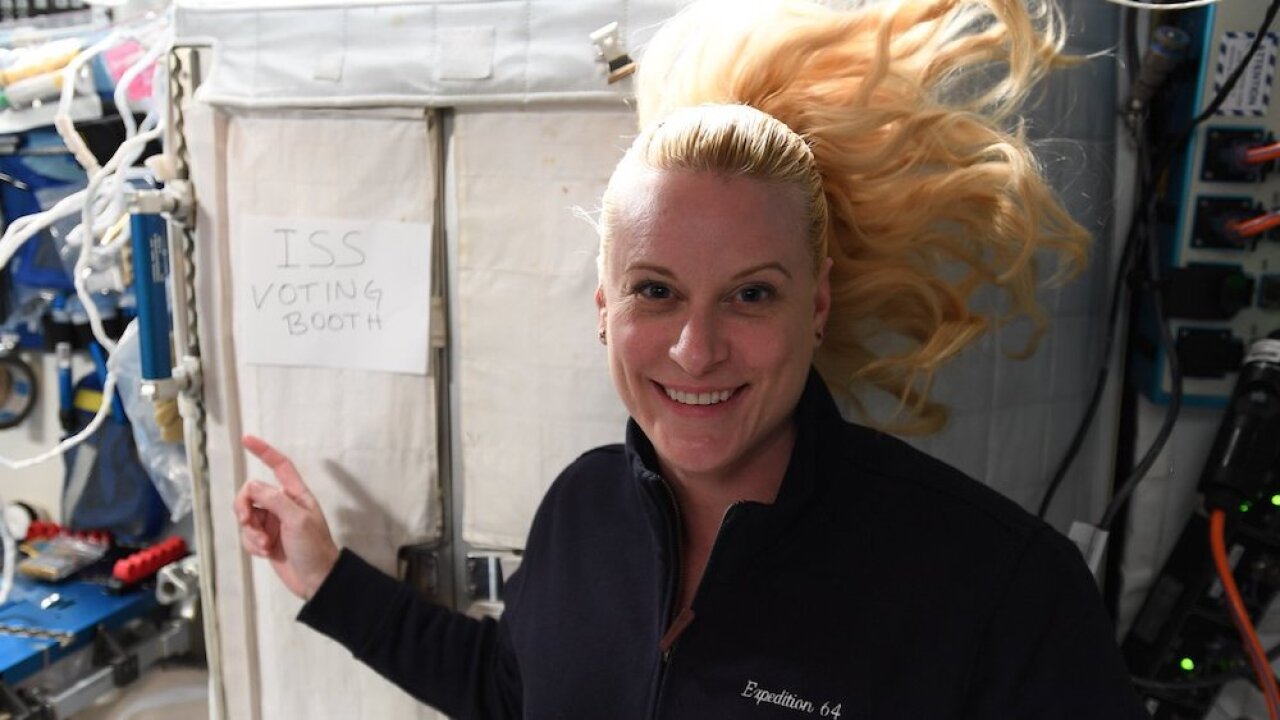 NASA astronaut Kate Rubins casts her ballot in the 2020 election from the International Space Station. (NASA)

For months, President Donald Trump and Democratic presidential nominee Joe Biden have been crisscrossing the country soliciting votes. But there's been one swing state they won't be able to visit — outer space.

Thanks to a special law passed in Texas in 1997, NASA astronauts aboard the International Space Station (ISS) are able to "vote while they float."

Astronaut Kate Rubins became the latest NASA official to vote from the outer limits on Thursday. She even created a "voting booth" on the ISS to feel more at home.

According to The Washington Post, astronaut John Blaha first raised concerns about an astronaut's extra-terrestrial right to vote in 1996, when he was aboard Russian space station Mir during that year's presidential election.

From the International Space Station: I voted today

Because most astronauts who visit the ISS live near Johnson Space Center in Houston, the state of Texas took up the responsibility of establishing the law in 1997. Later that year, astronaut David Wolf became the first American to vote in space — a tradition that astronauts have continued in the years since.

The law requires astronauts to select which local, state and federal elections in which they intend to vote about a year ahead of their launch. Then, six months before the election, the local election board sends an absentee ballot to an address marked "low Earth orbit" through the care of NASA. The agency then delivers a digital ballot to the astronaut, and once they fill it out, NASA returns it to the local election board.

The Washington Post reports that when astronaut Andrew Morgan voted from space earlier this year, his home county of Lawrence Couty, Pennsylvania provided him with an encrypted ballot that required him to enter a passcode only known to him.

You can vote from anywhere! The crew on board @Space_Station will be able to vote from Earth orbit much like I did in last year’s fall elections with @FVAP. pic.twitter.com/SdvJILKAom

Though astronauts are no doubt grateful to have the opportunity to exercise their American right to select their leaders, NASA says they do miss out on one key election day tradition — the "I voted" sticker.

As astronauts continue to vote with ease from hundreds of miles above the surface of the Earth, thousands of Americans down below continue to have problems exercising their rights — particularly amid the COVID0-19 pandemic. In Texas — home of Johnson Space Center — Gov. Greg Abbott attempted to limit ballot drop-off locations to a single location per county before a judge lifted that order. Voters across the country have also expressed frustration in requesting absentee and mail-in ballots.