13 of the scariest health hazards of Halloween 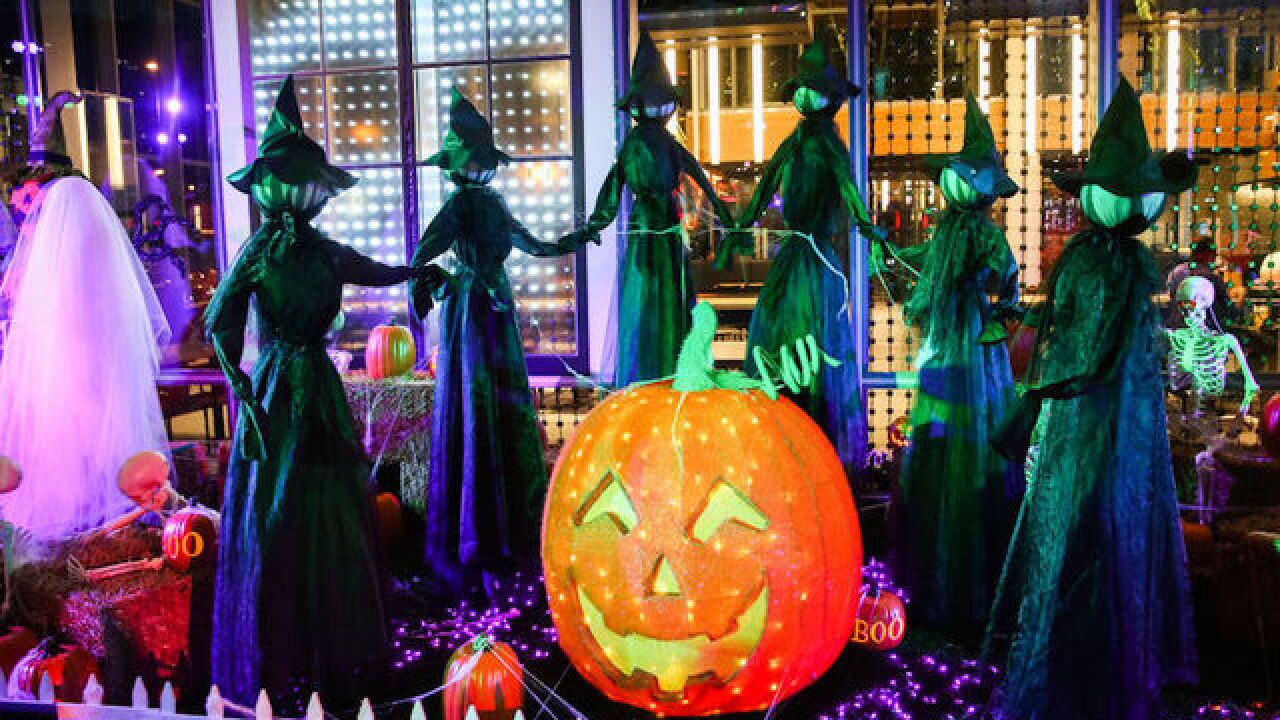 Americans go batty for Halloween. We're not afraid to dig deep to have a howling good time.

We're planning on spending $9 billion on the holiday, according to the National Retail Federation's annual survey.

Dressing up as spooks and monsters, such those in Fortnite (this year's most popular costume), will gobble up $3.2 billion in temporary apparel without even a bloodcurdling scream. Ghoulish decorations will slurp up another $2.7 billion, while candy will drain a mere $2.6 billion from our lives.

What's truly petrifying: The very items we purchase to have a frightfully fun holiday can help maim (or even kill) us and our loved ones if not used with caution.

Don't say we didn't warn you.

The statistics are shocking. Children are twice as likely to die on Halloween than any other day of the year as they trick-or-treat along our streets. That's according to a 2012 State Farm analysis of more than 4 million fatalities between 1990 and 2010.

An older study by the Centers for Disease Control and Prevention was even scarier: Children were four times more likely to die on All Hallows' Eve while walking.

More than a quarter of the deaths occurred between 6 p.m. and 7 p.m., State Farm found, with 70 percent happening in the middle of the block, away from a crosswalk or intersection.

Parents should make sure their child's costume sports reflective tape, and kids should carry a flashlight or glow stick. Children should not trick-or-treat alone, but in groups with parental supervision. Even then, parents need to be on guard: Excited children can easily sprint ahead and forget to look both ways.

These fatalities are not just among little kids, either. Most of the pedestrian deaths occurred among those between ages 12 and 15, followed by ages 5 to 8. Young people should be cautioned about the distractions of cell phone use and follow other safety guidelines, including use of flashlights.

So who is responsible for most of those pedestrian deaths? You guessed it -- drivers who drank or partied too much. And you don't have to "feel" drunk or stoned to be impaired. As the National Highway Traffic Safety Administration says: "Buzzed driving is drunk driving."

Sadly, young adult drivers aged 15 to 25 were responsible for the majority of pedestrian deaths of children, according to the State Farm analysis. Safety experts suggest keeping young, inexperienced drivers off the road on Halloween, and of course, be alert for signs of alcohol abuse.

One in 13 children under the age of 18 in the United States has food allergies. Chances are high one of those kids will visit your house for a treat.

Milk, eggs, peanuts, soy, wheat, tree nuts, fish and shellfish are responsible for 90 percent of allergic reactions, according to the Food Allergy Research and Education group. Some of those reactions can be deadly.

Many candies are off limits for children, either because they contain one of the top allergens or because of the danger of cross contamination.

To meet the needs of all your trick-or-treaters, you can join the Teal Pumpkin project, which suggests having non-food treats on hand, such as glow sticks, bubbles, stickers or markers. Then hang a teal pumpkin outside your home so kids with allergies will know you are allergy-safe.

Even if you're dressed as the devil, you don't want to burn. Yet fire hazards abound on Halloween, as people use sandbag candles and fiery jack-o'-lanterns to decorate their homes and walkways.

By law, all costumes, wigs, masks and other accessories sold in the U.S. are required to be made of flame-resistant materials. You'll know they are if they are labeled "flame resistant." That won't stop them from burning, says the Consumer Product Safety Commission, but they will be easier to extinguish once removed from the fire source.

If you make your costume, be sure to use flame-resistant cloth as well. Nylon and polyester are good choices. If you use more flammable materials such as cotton, add a fire-retardant spray to the costume and all of its bits and pieces.

Too much trouble? There's a startling video produced by the Greater Manchester Fire and Rescue Service in the United Kingdom where children's costumes are still considered toys and making them fire-resistant is voluntary for manufacturers. While dramatic music plays, a suited-up firefighter lights child's costume after costume. Within seconds, each costume bursts into flames and is consumed within minutes.

5. Revenge of the jack-o'-lantern

Pumpkin carving takes the lead each year over other Halloween injuries, according to the US Consumer Product Safety Commission. Out of an estimated 4,500 Halloween related injuries reported during October and November last year, 41 percent were related to pumpkin carving.

Safety experts suggest putting the sharp kitchen knives aside and using only the small pumpkin carving tools that come in kits, which are designed to minimize injuries.

Tripping or falling wins second place for most common Halloween injury, says the Consumer Product Safety Commission. Getting tangled in the long legs of ill-fitting costumes is a key reason; costume masks can also be part of the problem.

Many gruesome monster heads are ill-fitting, with poorly cut eye holes that limit vision. Ghostly sheets can both obstruct eyesight and become tripping hazards. Be sure whatever you wear or put on your kids will allow full range of eyesight and has been altered to prevent tripping before you head out the door.

Experts also suggest using face paint (carefully) instead of masks for better vision. Another tip: Never ride your bike or skateboard or skate wearing a costume.

7. Falling down on the job

In addition to tripping, falling off a ladder or other height ties for second most common injury during Halloween, says the Consumer Product Safety Commission.

Most occur while putting up or taking down Halloween decorations, most likely because of poor ladder safety skills.

The Consumer Product Safety Commission devotes an entire page to Ladder Safety 101. Some of the highlights:

Your child (and the child in you) will likely push back if you try to limit accessorizing that special Halloween outfit, but be aware of the dangers. Just like sticks, pointed props such as swords, spears and wands can poke out the eyes of excited children (or adults) gathered too close.

Considering that falls account for nearly a third of all Halloween-related injuries, that pointy object could just as easily end up in your child's eye, or someone else's.

Safety experts suggest trying to purchase softer, more flexible versions of a necessary prop for a safe, but stylish Halloween.

Your outfit demands "creature-of-the-underworld" eyes to make it suitably eerie. And you've found some cheap costume contacts online that would work perfectly.

Before you plop those into your eyes, beware: They could contain chlorine, iron and other harmful chemicals, according to the American Academy of Ophthalmology.

Many of the decorative contacts sold online and in gas stations and beauty parlors are not approved by the Food and Drug Administration. They could easily contain harmful colorants used to create tints and patterns on the surface of the lens. A study in Japan, where decorative contacts are popular, found those chemicals could remain even after rinsing with water.

The lens-making process can also leave uneven, scratchy surfaces that might not be visible but could scratch your cornea. Germs could then enter and infect the eye, creating scarring that can damage vision and cause blindness.

To drive home the dangers, the American Academy of Ophthalmology shares the story of Julian Hamlin, who at 17 ruined his eyes with $20 over-the-counter contacts. Ten surgeries later, he's still blind in one eye, and continues to suffer from eye infections and glaucoma in the other.

Don't turn that clown smile upside-down. Check how your skin will react to face paint before you slather your face with it. Applying a small bit on your arm a day or two before could save a lot of scratching, swelling, redness and embarrassment if you end up being allergic, the FDA advises.

The FDA does approve color additives in face paint and theatrical makeup and creates rules about where they should be applied on the body. A color that's OK for hair or nails, it says, might not be good for the skin.

To be sure if a Halloween makeup is safe, the FDA suggests checking the Summary of Color Additives on their website. If the color on the label of the product isn't on their list, "the company that made it is not obeying the law. Don't use it," warns the agency.

11. There goes the dental work

As the American Dental Association says: "Be picky if it's sticky." Caramels, taffy, gummies and other chewy candies stick to the teeth longer, contributing to cavities, but they are also notorious for pulling out fillings and crowns. Sticky, gummy candy and braces? What a tangled web you'd weave with that.

On the opposite end, hard candies can also be bad for your teeth. They also last longer in the mouth, contributing to decay, and you can break a tooth if you chomp down too hard. Hard candies can also damage brackets and other appliances that hold braces together.

What do dentists recommend? Chocolate is good because it's soft and leaves the mouth rather quickly. Just be sure to brush and floss.

Nine out of 10 Americans believe chocolate and candy make Halloween more fun, according to a survey released by the National Confectioners Association. And since Americans are expected to dish out 2.6 billion dollars on candy this year, we certainly plan to have a LOT of fun.

Of course, that means a LOT of extra calories. Even "fun size" candies, which have become the standard Halloween giveaway, contain a deceptively high calorie count, considering their tiny size.

Take fun-size M&Ms. A bag of originals contains 73 calories. Add peanuts and it's 90 calories. There are 80 calories each in Twix, Almond Joy, Milky Way and Snickers fun size bars; Butterfinger and Baby Ruth have 85. Fun size Skittles have 60 calories. And that favorite nibble, candy corn, is seven calories ... each. But who eats just one?

So if one candy splurge consisted of one of each of the candies above, plus about 30 candy corns, you'll have taken in 923 fun-sized calories.

To burn off that really fun time, you'd have to do about three hours of walking, biking, dancing or golf, or about 4.5 hours of light weight training. Having a blast yet?

13. A deadly snack for Fido or Fluffy

Halloween candy can be deadly for your dog or cat. No candy is healthy, but anything that's sugar-free, or contains raisins or chocolate can quickly cause seizures, even organ failure.

It can be all too easy for your pet to sneak a snack while your children inspect their haul, so be sure to put your furry friend in another room before bringing out the sweet stuff.

If pets do get hold of raisins, sugar-free candy or chocolate, call your vet immediately. The American Society for the Prevention of Cruelty to Animals has a poison hot line, too: (888) 426-4435.

If poisoned, your pet might need his or her stomach pumped. According to Petplan, the average cost of treatment for food poisoning last year was $730.17, but can easily rise to $1,100 or more depending on the severity of the poisoning and any complications.

Pet costumes are a growing trend, especially among millennials, says the National Retail Federation's annual survey. Choose costumes that aren't too restrictive, especially around the throat, say vets, and beware of loose costume bits that can be chewed off and swallowed.

Those, along with lollipop sticks, glow sticks and foil or cellophane wrappers can create digestive blockages you might not notice for days. In 2017 the average cost of surgical removal of a foreign object lodged in the intestines of a pet was $2,062.13. "As with food poisoning cases, more severe or complicated occurrences can cost much more," said Petplan's Meglio.