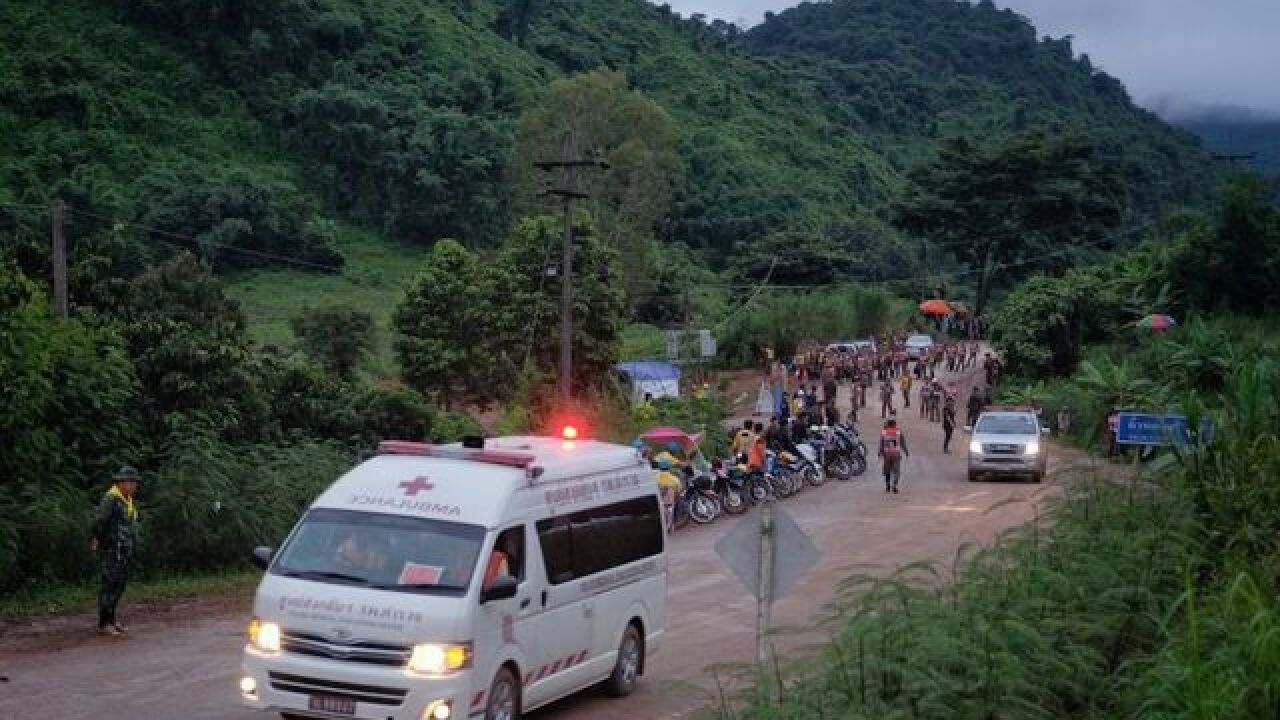 Image copyright 2018 Getty Images. All rights reserved. This material may not be published, broadcast, rewritten, or redistributed.
Linh Pham
<p>An ambulance carrying one of the boys rescued from Tham Luang Nang Non cave heading towards the hospital on July 8, 2018 in Chiang Rai, Thailand. Divers began an effort to pull the 12 boys and their soccer coach on Sunday morning after they were found alive in the cave at northern Thailand. Videos released by the Thai Navy SEAL shows the boys, aged 11 to 16, and their 25-year-old coach are in good health in Tham Luang Nang Non cave and the challenge now will be to extract the party safely. </p>

Four of the 12 boys who have been trapped in a flooded cave in northern Thailand for more than two weeks have been rescued, as the operation was put on hold overnight to allow oxygen tanks to be refilled.

The mission to free the remaining members of the group has been suspended for at least 10 hours, Chiang Rai Governor Narongsak Osotthanakorn said, as teams replenish supplies used up removing the first four boys.

But authorities face a new race against time as heavy rain, which had been predicted later this week, pummeled the cave complex in northern Thailand shortly after the first boys were freed.

The boys, who are due to be taken to Chiang Rai hospital for further medical examination, are said to be in good health, with their condition described by officials as "not that bad."

Confirmation of the initial rescue was posted on the Thai Navy SEAL official Facebook page late Sunday evening, several hours ahead of the initial schedule provided by authorities.

The first of the four boys emerged from the cave entrance about nine hours after a team of 18 international cave diving experts entered the underground chamber to begin the hazardous process of accompanying the boys through the flooded, narrow tunnels to safety.

Previously, the entire round trip through the cave network was thought to take roughly 11 hours to complete, but efforts to drain the tunnels of flood water appear to have shortened the journey time by at least three and a half hours.

The boys wore "full face masks and the rescue divers carried them out through the passage in the cave complex," Governor Osotthanakorn told a news conference after the rescue. "It was a very smooth operation today," he added.

Sunday's mission actually went quicker than it had in rehearsals, Osotthanakorn said, which took place over the last three to four days.

While the governor would not confirm the identities of the four boys, he said the first one emerged at 5:40pm local time, followed by the second boy 10 minutes later. Two other boys emerged from the cave at 7:40pm and 7:50pm local time.

Families of the children have been waiting anxiously for news following authorities' decision to initiate the rescue attempt at 10 a.m. local time Sunday, as storm clouds threatened to dump more water on the flooded caverns, undoing efforts to drain them.

Twelve boys -- aged between 11 and 16 -- and their coach, were discovered by two British divers on July 2, nine days after they disappeared during an outing in the Tham Luang Nang Non cave complex, in Chiang Rai, northern Thailand.

Those still inside the cave are perched on a small muddy ledge four kilometers (2.5 miles) inside the cave complex, surrounded by flood water and with a limited supply of oxygen.

For the boys, the most dangerous part of the journey out of the labyrinth cave system remains the first kilometer, in which they are required to pass through a flooded channel no wider than a person. During this process, rescuers need to hold their oxygen tanks in front of them and swim pencil-like through submerged holes.

Having completed this section, the boys are then handed over to separate, specialist rescue teams, who help assist them through the remainder of the caves, much of which they can wade through.

But rescuers have a dwindling window of opportunity, with forecasters predicting the return of heavy monsoon rains in the coming days, effectively sealing off the cave until October.

"We have two obstacles: water and time. This what we have been racing against since day one. We have to do all we can, even though it is hard to fight the force of nature," Osotthanakorn said earlier, as rain began to fall across the site.

The prospect of a downpour has been looming over rescuers since the very beginning. It was the rain that stranded the boys and their coach inside the caves to begin with, after they left their bicycles and ventured into the cave network late last month.

"The heaviest rain has yet to come," said CNN meteorologist Allison Chinchar.

Rescue teams have been helped by the fact that the rain stopped for several days, Chinchar said, allowing water to be pumped out of the caves and making it possible for the four boys and specialist rescue teams to make the final leg of the journey on foot.

But that could change in the coming days, Chinchar added. Monday, Tuesday and Wednesday each have an 80% to 90% chance of rain.

"And really when you look at the long-term forecast, it really extends the next 7 to 10 days," she said.

Osotthanakorn told reporters there would be a meeting Sunday evening to plan next steps, and that authorities want to ensure conditions are stable before beginning the next phase of the rescue.

Divers have previously described conditions in the cave network as some of the most extreme they have ever faced.

The decision to move the boys using divers has not been taken lightly. On Friday, a former Thai Navy SEAL died while returning from an operation to deliver oxygen tanks to the cave where the boys are located.

Finnish volunteer diver Mikko Paasi, a long-term resident of Thailand, said the death of the Thai Navy SEAL had changed the mood on the ground and made real for rescuers just how dangerous the mission had become.

"Definitely, you can feel it that it has an effect, but we're moving on. Everyone is a professional so we're trying to put it away and avoid it happening again," he said, adding: "Everybody is focusing on getting these boys out -- keeping them alive or getting them out."

In the hours preceding the rescue, a letter the boys had sent to their families was published on the Thai SEALs' Facebook page. The letter shows the boys in good spirits despite their ordeal.

In neat blue handwriting, 11-year-old Chanin Viboonrungruang, the youngest of the group, told his parents not to worry, and said he was looking forward to eating fried chicken.

His parents, who along with other families, have maintained a constant vigil at the site since the boys first became trapped.

On reading the letter Saturday evening, Chanin's father, Tanawut Viboonrungruang, said he felt a great sense of relief. "I had been worried about my son, that he would be exhausted, he would be tired," he said.

Now, more than two weeks after their children became trapped in a flooded cave, some of the families are finally celebrating their return.

Now that the first of the boys have been taken to a nearby hospital, doctors there will begin evaluating the impact to their long-term health.

One of the primary concerns will be the boys' exposure to a lack of oxygen, said Dr. Darria Long Gillespie of the University of Tennessee. "As soon as they get out, that's what they'll be checking: their oxygen levels and their breathing."

Thai officials said Friday that oxygen levels inside the cave plummeted to a dangerous 15% -- shy of the US Department of Labor's Occupational Safety and Health Administration's "optimal range" of oxygen, which is between 19.5% and 23.5%.

As oxygen drops below the lower threshold of the optimal level, the body begins to undergo changes and may face the serious risk of hypoxia, the condition that causes altitude sickness, according to OSHA.

The boys will also be checked for malnutrition, dehydration and an array of other health effects.