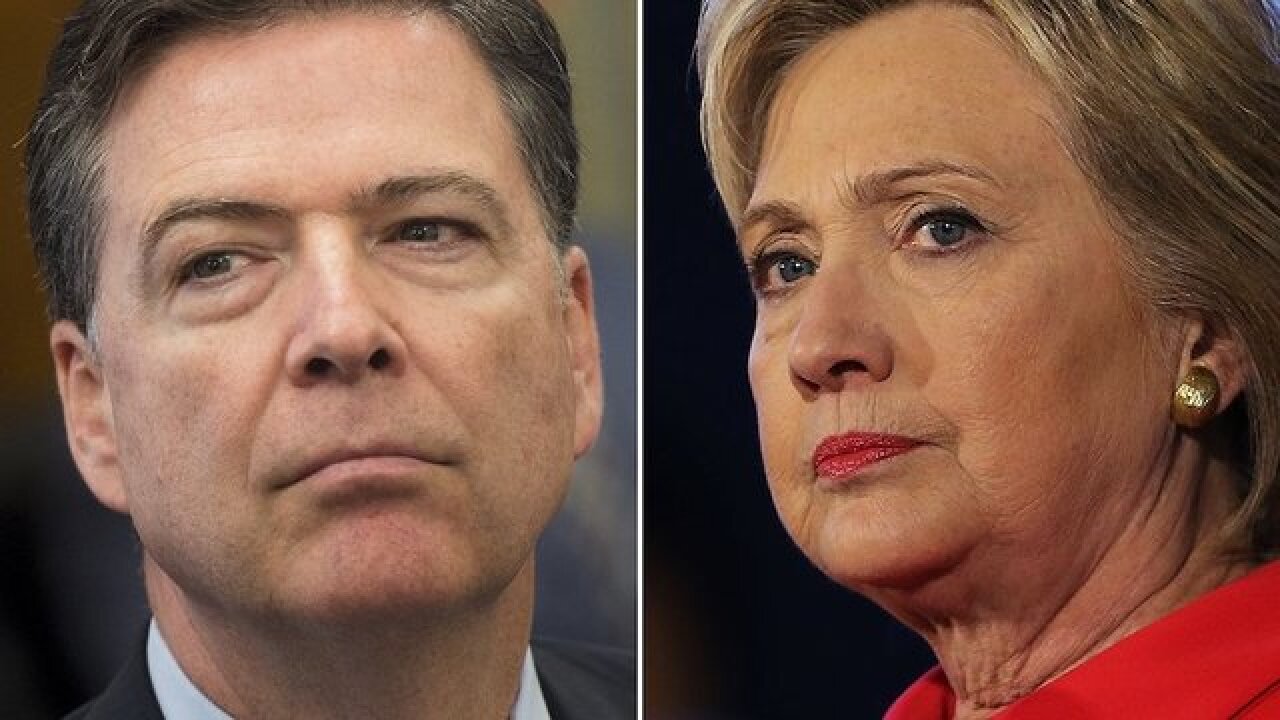 Image copyright 2018 Getty Images. All rights reserved. This material may not be published, broadcast, rewritten, or redistributed.
Getty Images/CNN
<p>The Justice Department's internal watchdog will issue a wide-ranging report Thursday afternoon on how top federal officials handled the investigation into Hillary Clinton's use of a private email server while secretary of state.</p>

The Justice Department's internal watchdog found that former FBI Director James Comey's actions in the Hillary Clinton email investigation deviated from the department's norms but that Comey was not motivated by political bias, according to two sources familiar with the report.

The inspector general released a sweeping report Thursday detailing a series of failures by the top federal officials in charge of the investigation ahead of the election, including how Clinton handled classified information while secretary of state.

The report from Inspector General Michael Horowitz concluded that the prosecutorial decisions in the Clinton case were "consistent" and not affected by bias or other improper actions. But it said that senior leaders' handling of the Clinton case cast a cloud over the bureau and did lasting damage to the FBI's reputation.

"The damage caused by these employees' actions extends far beyond the scope of the Midyear (Clinton) investigation and goes to the heart of the FBI's reputation for neutral factfinding and political independence," the report states.

A key finding: Comey erred in his decision not to coordinate with his superiors at the Justice Department at key moments in the Clinton email investigation. Horowitz said that Comey was "extraordinary and insubordinate," and did not agree with any of his reasons for deviating from "well-established Department policies."

The report found that the Strzok and Page texts "cast a cloud" over the credibility of the investigation, although they found no evidence "that these political views directly affected the specific investigative decisions that we reviewed."

But the inspector general zeroed in on the FBI's slow reaction time to the new emails discovered on the laptop of Anthony Weiner. "We searched for evidence that the Weiner laptop was deliberately placed on the back-burner by others in the FBI to protect Clinton, but found no evidence in emails, text messages, instant messages, or documents that suggested an improper purpose," the report said.

However, Horowitz did not have confidence that Strzok was free from bias when he decided to prioritize the Russia investigation over following up on the emails found on the Weiner laptop.

The roughly 500-page report provides a detailed accounting of the series of events leading up to Comey's decision in July 2016 to announce publicly — without Justice Department approval — that while he found Clinton's actions "extremely careless," he would not recommend charges against her.

He was also advised by the Justice Department that his intent to tell Congress in October 2016 that FBI agents had recovered additional emails possibly relevant to the Clinton probe would run counter to department policy, and yet he did it anyway.

Congressional staff and lawmakers were briefed on the report behind closed doors on Thursday ahead of its release, and Trump was briefed by Deputy Attorney General Rod Rosenstein.

The long-awaited report is likely to reopen wounds left festering since the 2016 election and breathe new life into the debate about the extent to which Comey's actions affected the outcome of the presidential race.

Many of these flashpoints from the Obama administration, which served as catnip for Trump on the campaign trail, have largely faded into the rearview of the general public's consciousness.

But the President's continuing confrontation with the former FBI director remains front and center, as he defends against a narrative -- much of his own making -- that he fired Comey not because of missteps on the Clinton email probe, but rather to thwart the FBI's Russia investigation.

But Democrats argued that the report shows that Comey actually helped elect Trump.

"The stark conclusion we draw after reviewing this report is that the FBI's actions helped Donald Trump become President," said Reps. Jerry Nadler of New York and Elijah Cummings of Maryland. "As we warned before the election, Director Comey had a double-standard: he spoke publicly about the Clinton investigation while keeping secret from the American people the investigation of Donald Trump and Russia."

The practical effect of its conclusions on Comey's legacy and credibility could prove especially potent in the coming weeks and months ahead.

Congressional Republicans briefed on the report argued it condemned Comey.

"It is a damning indictment of former FBI Director Comey and the Department of Justice's mishandling of the investigation," said Rep Darrell Issa, a California Republican.

Senate Homeland Security Chairman Ron Johnson, a Wisconsin Republican, disputed the finding that the investigation was not motivated by political bias.

"Absent an outright confession, they're not going to be able to draw that conclusion," Johnson said. "That will be up to the American public to draw their own conclusion: I don't see how the inspector general can draw the conclusion."

Attorney General Jeff Sessions said in a statement that the report "reveals a number of significant errors by the senior leadership of the Department of Justice and the FBI during the previous administration."

"Accordingly, this report must be seen as an opportunity for the FBI -- long considered the world's premier investigative agency -- and all of us at the Department to learn from past mistakes," Sessions said.

The report assesses the actions of a number of key players and events, including then-Attorney General Loretta Lynch's tarmac meeting with former President Bill Clinton, the text messages from Page and Strzok and then-Deputy FBI Director Andrew McCabe's response to the discovery of new emails found on Weiner's laptop.

Beyond Comey, one source briefed on the report said it found there was no evidence that the conclusions reached by prosecutors were affected by political bias in the Clinton email investigation.

The report faults Lynch for her meeting with Clinton on a Phoenix airport tarmac. But it says there was no evidence that Lynch and Clinton discussed the investigation into Hillary Clinton or any other inappropriate discussions.

Instead, the report finds that Lynch expressed poor judgment in taking the meeting itself, as well as letting it drag on rather than cutting it short.

This story has been updated.