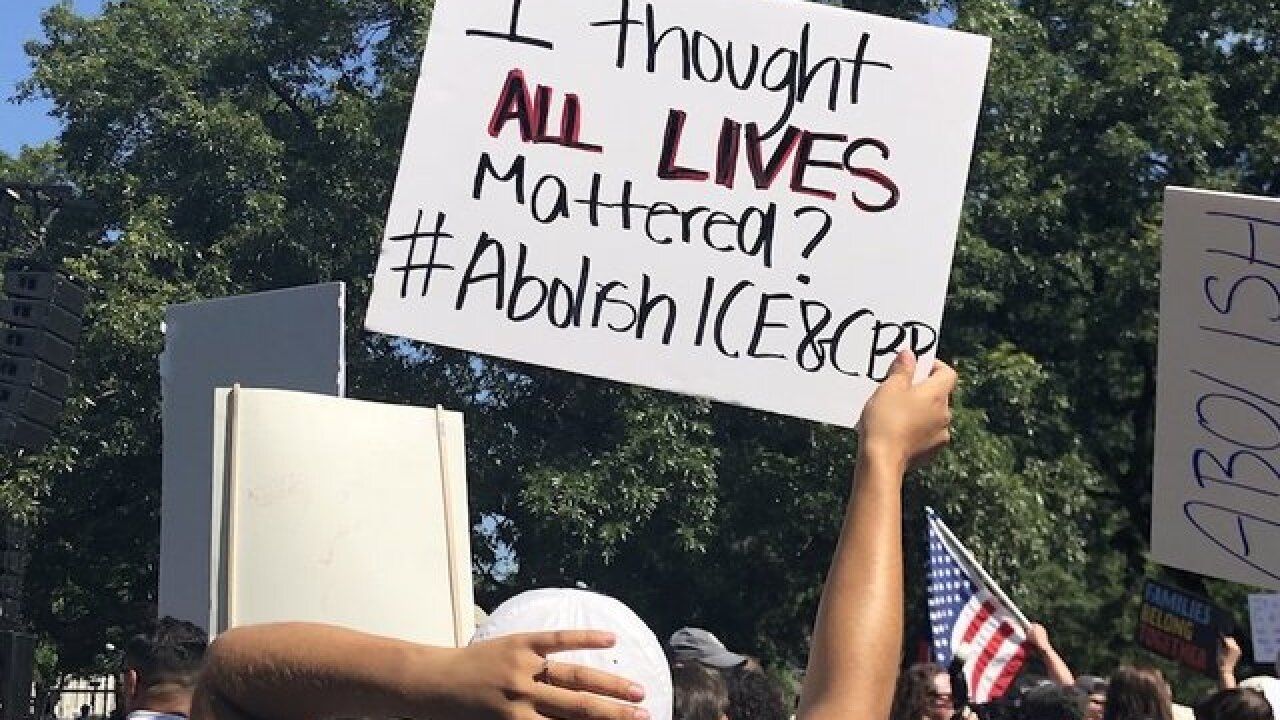 Crowds took to the streets of US cities Saturday to demand "Families Belong Together" nearly two months after the Trump administration implemented its "zero tolerance" policy toward undocumented immigrants, prompting the separation of thousands of children from their parents.

The main rally was in Lafayette Square in Washington, but hundreds of marches, protests and rallies were underway across the country to call for the immediate reunification of migrant families and an end to family detentions and separations.

According to organizers, protesters have three demands:

• They want separated migrant families to be reunited immediately.
• They want the government to end family detentions.
• And they want the Trump administration to end its zero tolerance policy.

Cries of "Shame!" rose up from crowds in both New York and Washington as the marches got underway. Demonstrators in Atlanta carried cages with baby dolls inside. Protesters in Houston chanted, "No baby jails," outside City Hall.

Many attendees carried signs, some demanding a change to the administration's policy, others celebrating the contributions that immigrants make to the country.

"We are all immigrants," one said.

"Seeking safety is not a crime," another said.

"Let our children dream. Let them go!" a sign in Washington said.

And there were plenty of signs and shirts declaring, "I really do care, do u?" -- a dig at the jacket first lady Melania Trump wore while departing for a trip to the southwest border last week.

"I'm outraged that families are being separated," said Margaret Stokes, 54, a Virginia teacher protesting in the nation's capital. She carried a sign that asked, "Where are the children?"

"Separating families, especially young children, without a plan to reunite them is abhorrent," Stokes said. "This is not America.

"We need to let the administration know that we will not become numb to these atrocities."

Rachel Gregory, 39, was one 575 activists arrested Thursday during a protest at a US Senate office building.

She said she brought her 5-year-old son, Aaron, to Saturday's protest in Washington to show him she doesn't want to be a part of an America like that. She said the policy indicates the country has "no morals," adding that "the GOP claims to be pro-life but is stealing babies from their family."

But Saturday's protests drew people from both sides of the aisle.

"It's unconscionable, immoral. None of the words are quite strong enough," said Allison Thompson, 49, a lawyer from Fayetteville, North Carolina. She said she was a registered Republican attending her first protest.

"Separating a child from a parent -- as a parent -- is the most inhumane thing ever," the mother of two said. "There is just nothing worse to me."

The crisis has been building for weeks

More than 2,500 undocumented children were separated from their parents in the weeks since the zero-tolerance policy took effect. Under the policy, any adult caught crossing the border illegally faced prosecution, and their children were sent to federal shelters all over the United States.

Outrage over the separations has been at a fever pitch for weeks. The anger hasn't abated either, even after President Donald Trump signed an executive order June 20 reversing the family separation policy.

Six days after that order was signed, only six children had been reunited with their parents -- meaning more than 2,000 children were still in limbo, feeding the furor and raising questions about whether the government actually has a plan to reunify families.

A federal judge this week ordered a halt to most family separations at the border and the reunification of families. Within 14 days, children under 5 were to be back with their parents, and within 30 days, children 5 and older were to be reunited with theirs.

But Families Belong Together protesters don't want to wait.

Jose Flores, a 34-year-old protester in Washington, posted a picture of his daughter on Instagram, flanked by signs supporting immigrants. He told CNN about his father who came to the United States illegally from Guatemala more than three decades ago.

"With a little luck and some persistence he was able to get his papers and brought us to the USA in 1987," Flores said. "He passed away in 2000 a homeowner, business owner and citizen.

"That is why I march today, to honor his sacrifice. And to teach my daughter of the same sacrifice."

A man named Mark told CNN's Rene Marsh he was participating to show "we're all people."

He compared this moment to dark ones in the country's past, such as when Japanese-Americans were placed in internment camps during World War II, or when Jews fleeing persecution in Europe sought refuge on America's shores and were turned away.

"They're here because they want to get away from the violence and corruption in their own country," he said of immigrants crossing the border today.

MacKenzie Banks, 19, carried a sign at the Washington protest that read, "If these children lived in my uterus would y'all start caring."

"I am protesting in DC today because I cannot turn a blind eye to the clear human rights abuses brought forth by this administration," Banks told CNN. "They deserve to be held accountable for the atrocities they are committing against our brothers and sisters."

Crowds in Washington also heard from the immigrant communities most directly affected by the Trump administration's policies and rhetoric.

A 12-year-old girl named Leah, the daughter of undocumented immigrants, stepped up to the podium and spoke about living in fear of "losing my mom to deportation."

"I don't like to live with this fear," she said through tears streaming down her face. "It's scary. I can't sleep. I can't study. I am stressed.

"I am afraid that they will take my mom away while she is at work, out driving or at home," she continued. "I don't understand why this administration won't support mothers who just want a better life for their children."

'This is beyond politics'

"This is not left or right," said Anna Galland, executive director of MoveOn.org, one of the organizations leading Saturday's protests. "It is right and wrong."

Galland said she and US Rep. Pramila Jayapal put out a call for protests less than two weeks ago, and they've been "overwhelmed" by the response.

Rallies were to take place in 750 cities big and small all over the country, Galland said, as people stand up for the rights of migrant families.

"I think if you asked someone on the street, 'Is it a political question whether we should tear babies out of their mother's arms?' they would say, 'No, that's a moral question,' " Galland told CNN's Christi Paul. "And this is a moment of moral outrage."

"This is beyond politics," the Washington state Democrat said Saturday morning. According to her, the rallies are about keeping the issue "at the front of the agenda" and sending a message to Trump that he can change his policy immediately.

"You don't put kids in cages," she said. "You don't separate breastfeeding babies from their mothers. You don't put asylum-seekers in prison, and we're calling for an end to that today."

Sen. Elizabeth Warren also echoed that sentiment at a rally in Boston.

"This moment is a moral crisis for our country," the Massachusetts Democrat said.