VIDEO: Customer goes on rant about sign in Spanish at Mexican restaurant 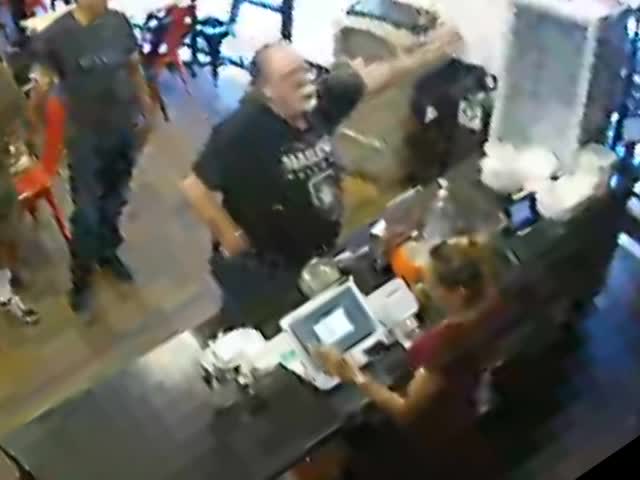 A bilingual menu apparently set off a customer in Southern California.

A security camera caught the man launching into a tirade at employees working a Mexican restaurant in Anaheim, which included him threatening to call immigration.

"It says it in Mexican. We're not in Mexico. We're in America. Not Spanish," the customer can be heard saying on video.

Video also shows him yelling at customers who try to come to the cashiers' defense.

"I'm an American! I don't do Spanish," the customer says.

"Go get a hamburger. Go get a hot dog," one person says to the man.

The owner of Palapas Tacos said the man could not understand the special's board because one word was in Spanish.

"My cashier was really shaking when he left. He was aggressive. He was not having a good day," said the restaurant owner Juan Del Rio.

The sign for the special said it was only good for Friday -- Viernes in Spanish. Inside the restaurant the sign clearly says Friday in English.

Even when the cashier pointed that out, witnesses say the man didn't let up.

Del Rio then grabbed his cellphone to record the man as he was leaving.

"Who are you going to call?" Del Rio asks the man.

"Because you're not legal!" the man says.

That was particularly upsetting to the cook who also was on the receiving end of the rant.

Ruben Velasquez is shy about speaking English on camera but said in Spanish:

"One works honorably. We don't take the bread out of anyone's mouths,” said Velasquez.

"I honestly don't know if he is racist, he hates Mexicans or hates his life," said Del Rio.