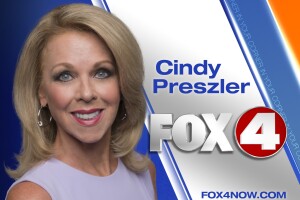 Hello SW Florida! My name is Cindy Preszler. I’m originally from the Midwest but I’ve lived in several different cities all over the country throughout my career. I graduated from the University of South Dakota with meteorology course work from Mississippi State University.

I joined the team at Fox 4 in January of 2019 after living and working in St. Louis, MO for over 20 years. I owned and operated my own weather website/social media platform called WeatherSTL.com since 2016 after serving as chief meteorologist for KSDK-TV since 1998. Prior to that, I worked as the weekday morning meteorologist for WMAQ-TV in Chicago, IL. Lexington, KY was my home previously where I was the chief meteorologist at WKYT-TV for several years. I also worked as an on-camera meteorologist at The Weather Channel and covered the landfall of Hurricane Hugo and the San Francisco Earthquake in 1989. In addition to my work as a meteorologist, I’ve also worked as an anchor/reporter at two different stations in Savannah, GA.

I hold two seals, the American Meteorological Seal (AMS) and the National Weather Association (NWA). I am also a former member of the AMS Broadcast Board. I’ve had the opportunity to do fill-in work for both NBC’s Today Show and CBS This Morning. I’ve also been featured in Sports Illustrated. Over the years, I’ve been awarded multiple Emmy Awards and several Missouri Broadcaster’s Awards.

My love for weather has been life-long since growing up on a farm in South Dakota. I learned the importance from my dad and grandmother and to this day, my dad and I discuss the weather every few days! I am truly fortunate to have a career in something I love.

When I’m not working, I like to travel with my husband Dave. We love boating, skiing, and hanging out at the beach. We also have two shelter cats, Sunny and Snowy.